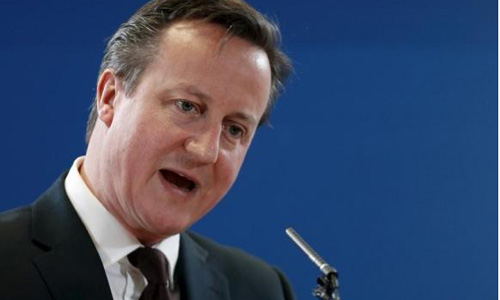 LONDON - British Prime Minister David Cameron and six other party leaders will take part in a live TV debate ahead of a closely-fought May 7 election, broadcasters said on Saturday, but there will be no head-to-head with his main rival. Under plans agreed on Saturday after months of political wrangling, Cameron and opposition leader Ed Miliband will also participate in a live question and answer (Q&A) programme. Ahead of the most unpredictable UK election since the 1970s and with memories of the high-impact nature of the last pre-election TV debates looming large in their thinking, politicians and broadcasters have spent months arguing over formats. Cameron's rejection of a head-to-head with Miliband, leading his opposite number in the Labour party to call him a coward, has been widely interpreted as an effort by Cameron to protect his own high personal ratings while depriving rivals of publicity. The pair will appear in the Q&A format on March 26, broadcasters BBC, ITV, Sky and Channel 4 said in a joint statement, which they said followed conversations with all parties. "A studio audience will also put questions directly to the two leaders seeking to be Prime Minister. The leaders will not debate with each other during the programme," the broadcasters said in their statement. That will be followed by one live election debate featuring all seven political party leaders on April 2. In 2010, the pre-election debates were watched by 22 million people and many commentators believe they influenced the result, boosting the centre-left Liberal Democrats and depriving Cameron's Conservatives of an overall majority. Under the agreed plans, there will also be a debate programme involving all opposition party leaders on April 16, and another Q&A programme featuring Liberal Democrat leader Nick Clegg as well as Cameron and Miliband on April 30. Broadcasters had originally hoped to host two seven-way debates and a direct contest between Cameron and Miliband. - REUTERS