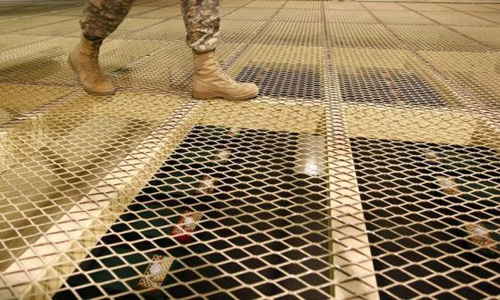 NEW YORK (Reuters) - Five British MI-5 officers expected to testify anonymously in wigs and makeup in the US trial of an accused al Qaeda operative may be portrayed in courtroom sketches with only "blank faces" and "generic hair," a federal judge said on Monday. US District Judge Raymond Dearie in Brooklyn, New York, ordered media sketch artists at the trial of Pakistani-born Abid Naseer to refrain from detailed portrayals of the officers with Britain's domestic counterintelligence agency, calling them "committed, lifelong operatives." "The situation is grave," Dearie said in a court hearing. The MI-5 officers are expected to testify Tuesday in the trial of Naseer, who the US government says took part in a plot to carry out bombing attacks in the United States and Europe. Prosecutors have called their testimony essential, saying their surveillance of Naseer from 2009 made them the only witnesses to activities he undertook to prepare for an attack in Manchester, England, which ultimately was never carried out. Dearie had previously at prosecutors' urging approved a variety of steps aimed at protecting the officers' identities, including identifying them only through numbers and the use of wigs and "light" make-up. Dearie's order that artists draw Naseer with "blank faces, generic hair," came despite objections from some members of the media who called the wigs protection enough. But Zainab Ahmad, a prosecutor, said not all of the officers would be wearing wigs. Naseer, 28, faces up to life in prison if convicted of providing and conspiring to provide material support to al Qaeda and conspiring to use a destructive device. Prosecutors say Naseer was leader of an al Qaeda cell plotting an attack on Manchester. Another cell conspired to bomb the New York City subway system, while a third planned to attack a Copenhagen newspaper. Naseer was initially arrested in Britain in 2009 along with a dozen men on suspicion of plotting the Manchester attack. No charges were brought, and a British court blocked Naseer's deportation. Naseer was re-arrested by British authorities in 2010 after the United States indicted him, leading to his extradition in 2013.