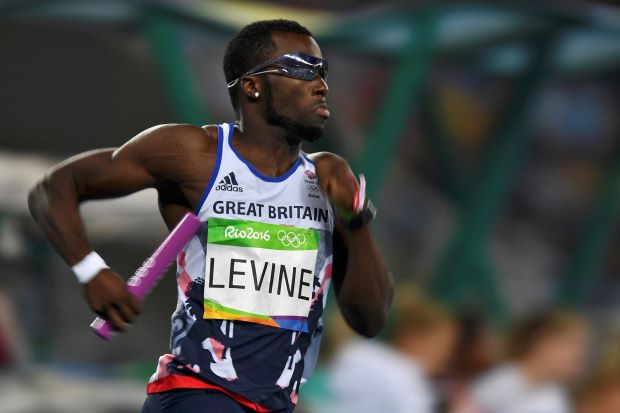 LONDON (Reuters) - Britain’s Olympic sprinter Nigel Levine has been banned from the sport for four years after failing a drugs test. Levine was provisionally suspended in February and on Tuesday UK Anti-Doping (UKAD) confirmed the 29-year-old’s ban. UKAD said Levine “tested positive for the presence of the prohibited substance clenbuterol, an Anabolic Agent, following an Out-of-Competition test on 24 November 2017.” Levine, who specializes in the 400 metres, competed at the 2016 Rio Olympics and was part of the British squad that won 400m relay gold at the 2014 European Championships in Zurich. UKAD Chief Executive Nicole Sapstead said: “All athletes must adhere to the principle of strict liability, and are solely responsible for any substances found in their system. “Mr Levine is an elite athlete, who has competed at the Olympic Games, European and World Championships, and has received significant anti-doping education throughout his career. “It is up to role models such as Mr Levine to uphold the highest standards when it comes to anti-doping, ensuring they check all supplements thoroughly and are 100 percent certain they know that what they are consuming is not prohibited.” UKAD said in their reasoning for the decision that Levine has “accepted that clenbuterol was present in his sample but suggested that its presence was due to his use of supplements that must have been contaminated with clenbuterol.” The sprinter was not able to demonstrate that his supplement had been contaminated with the drug however, UKAD said. Levine has not competed since breaking his pelvis in a motorbike crash in January last year that also involved fellow sprinter James Ellington.