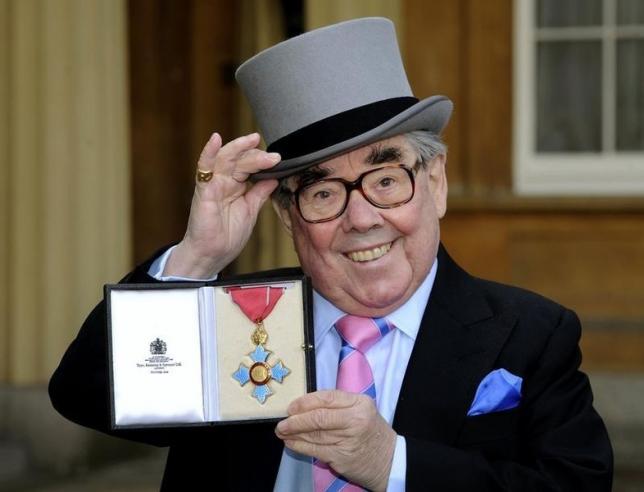 LONDON - Ronnie Corbett, the bespectacled British comedian best known as the small half of the hit television double act "The Two Ronnies", has died surrounded by his family, his publicist said. He was 85. As tributes flowed in from fellow entertainers, Prime Minister David Cameron said Corbett had the rare talent of making all generations laugh. "He'll be remembered as one of the all time great comedians," he said on Twitter. Born in Edinburgh in 1930, the baker's son decided early on that he wanted to be an actor, and moved to London to begin a career on stage and small screen in the early 1950s. At just over 5 feet 1 inch tall, Corbett initially played characters younger than his real age, and he joked about his size throughout his career with self-deprecating humor. During the 1960s he appeared in cabarets at Winston's, Danny La Rue's nightclub in the exclusive Mayfair district of London, and it was there that he was spotted by TV host David Frost who asked him to appear in The Frost Report. The satirical sketch show was Corbett's big breakthrough, introducing him to Ronnie Barker, with whom he formed the legendary comedy double act The Two Ronnies which firmly established Corbett as a household name. Broadcast on the BBC from 1971 to 1987, it drew audiences of up to 17 million viewers at its peak. The comedians performed sketches and musical numbers, and Corbett would present a lengthy monologue in the middle of each show in which he took several minutes to tell a simple joke. After The Two Ronnies ended, Corbett returned to the TV screens in "Sorry!", a sitcom in which he played a downtrodden librarian in his 40s who lived at home with a domineering mother. In 2005 Corbett briefly reunited on screen with Barker for a series called The Two Ronnies Sketchbook, comprising comedy sketches from their old series with original linking material. Barker died later that year at the age of 76. Both Ronnies were awarded the OBE in 1978, and Corbett was awarded the CBE in the Queen's New Year Honours List at the start of 2012 to reward his services to entertainment and charity. "RIP the lovely, funny legend Ronnie Corbett," comedian Ricky Gervais wrote on Twitter. "It was an absolute honor and joy to have known him." BBC Director-General Tony Hall said: "He was quite simply one of the true greats of British comedy." -Reuters