Brits lead the pack in Wimbledon... at queuing 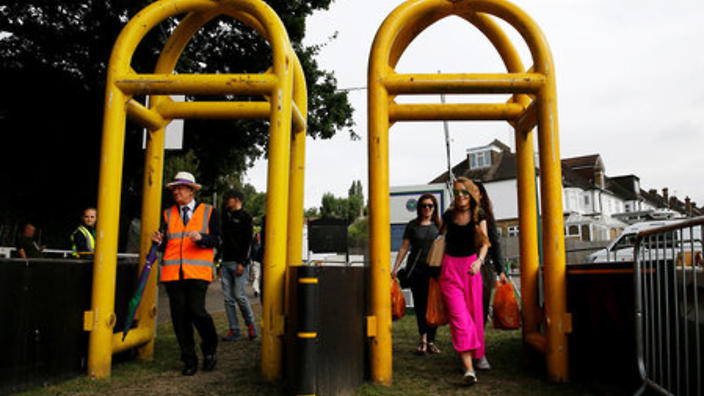 Brits lead the pack in Wimbledon... at queuing

LONDON - While the best tennis players from around the world put their ability to the test on the lawns of Wimbledon’s All England Club, the British public is busy showing off one of things it does best - queuing.

But this is not just any queue. This is The Queue.

Tens of thousands of fanatics become part of the world famous tournament every year, as they line the streets and parkways of this south-west London suburb in the hope of gaining access to the grounds.

For the first nine days of the tournament, organisers hold back 500 Centre Court tickets for general sale at the turnstile.

The club also sells about 500 tickets for Court One each day, and another 500 for Court Two "for as many days as a full programme of matches can be maintained".

The Queue now boasts its own Twitter account offering updates and the latest details to a following of more than 9,000 people.

On arrival at the queue, hopefuls are handed a Queue Card, their proof of position, along with a 29-page guide advising on the ticketing rules and regulations: you cannot buy tickets for another person, for example.

These days up to 10,000 cards are issued and some fans camp for days to get into a particular match, often days in advance.

Annie Smith is a regular at The Queue. Her reason is straightforward: "Well, we want tickets," she said.

But the line has become more than just gaining entry, and is now an experience in itself, according to 27-year-old Alisha. "The tennis is fun but the whole experience of waiting in a crowd of exited tennis fans makes it a whole lot better," she said.

Wimbledon is increasingly unusual in allowing on-the-day sales. Most other sporting events have moved entirely online, but some say this system results in a purer turnout of committed tennis fans.

"Anyone can go online with a credit card and buy a ticket, and some might not even turn up if the weather is not great, or the match-up they had hoped for doesn't work out," said Marty Paintman as he queued.

"But people like us who queue up, we are committed - we are here because we really, really want to see the tennis. And that is the sort of atmosphere you want in the crowds, and the sort of fans you want to reward.

"It makes for a better atmosphere all round." –Reuters