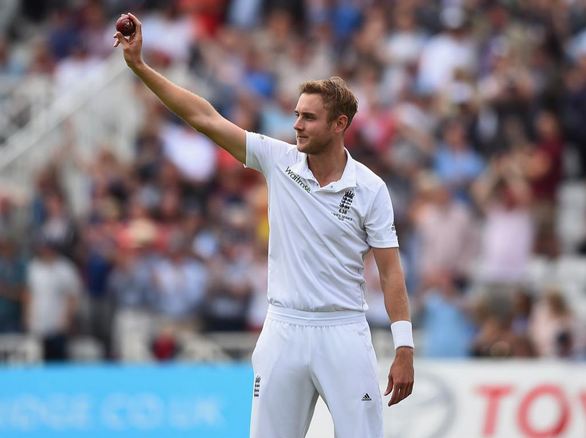 NOTTINGHAM - England skittled out shell-shocked Australia for 60 and piled up 274 for four in reply to take control of the fourth Ashes Test on a dramatic first day at Trent Bridge on Thursday. A rampant Stuart Broad took eight wickets as the tourists were dismissed before lunch, while Joe Root (124 not out) and Jonny Bairstow (74) batted England into a commanding position. The hosts, 2-1 up in the series and without their leading bowler James Anderson, needed only 18.3 overs to run through the touring side who collapsed to their joint sixth-lowest Ashes total in just over 90 minutes. Broad struck five times in his first four overs, claiming his 300th test victim with the third ball of the morning when he had opener Chris Rogers caught at first slip by Alastair Cook for a duck. Steven Smith, on six, edged the last ball of the first over to Root in the slips and David Warner (zero) nicked his second delivery from Mark Wood to wicketkeeper Jos Buttler, leaving the Australians in tatters at 10-3. Captain Michael Clarke, who dropped one place down the order to number five, walked out to face only the ninth delivery of the match. BRILLIANT CATCH England, who won the toss, struck again when Shaun Marsh edged Broad to Ian Bell at second slip and Adam Voges was brilliantly caught one-handed by Ben Stokes at gully as Australia slumped to 21 for five. Clarke survived 25 minutes for his 10 runs before he drove loosely at a wide ball from Broad and was well caught above his head by Cook to give Broad his 14th five-wicket haul in Tests. Steven Finn bowled Peter Nevill for two before the 29-year-old Broad struck again, producing another perfect delivery which Mitchell Starc diverted into the safe hands of Root for one and Mitchell Johnson fell in identical fashion for 13. Nathan Lyon and Josh Hazlewood added 13 runs for the last wicket before the former edged Broad to Stokes to give the fast bowler test-best figures of 8-15. Adam Lyth's poor run continued when, on 14, the England batsman edged Starc to wicketkeeper Nevill and left-armer Starc produced a venomous full delivery to trap Bell lbw for one. Root unfurled a couple of sumptuous cover drives as England eased past Australia's total and he and Cook looked in complete control in a partnership of 62 until the captain, on 43, misjudged another swinging ball from Starc and was adjudged lbw. England took tea on 99 for three and Root and Bairstow turned the screw on Australia in the final session as the crowd basked in sunshine. Bairstow glanced Starc to the boundary to reach his fifty and Root cut part-time medium-pacer Warner for his 17th four to get to his eighth test century, punching the air and raising his bat to all corners of the ground. Bairstow was closing in on his maiden test hundred when he clipped Hazlewood tamely to Rogers at square leg, ending a superb fourth-wicket stand of 173 from 206 balls. Root and nightwatchman Wood (two not out) took England safely through to the close and the hosts will look to extend their lead on Friday after a near-perfect opening day. –Reuters