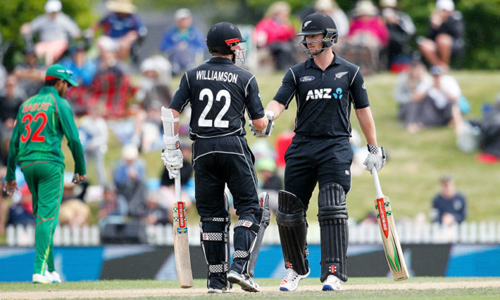 NELSON - Captain Kane Williamson and Neil Broom both flirted with centuries as New Zealand cruised to an eight-wicket victory over Bangladesh in their third one-day international to complete a 3-0 series sweep at Saxton Oval in Nelson on Saturday. Williamson (95 not out) combined with Broom in a 179-run partnership that was broken when the recalled Broom was caught for 97, as the hosts cruised to 239 for two in 41.2 overs. The visitors had wasted a century opening stand between Tamim Iqbal (59) and Imrul Kayes (44) to reach a below-par 236 for nine in their 50 overs. Jimmy Neesham was 28 not out with Williamson, who eschewed the chance to score his ninth one-day international century in order to wrap up the victory instead. Broom, who was dropped without scoring in the slips off Mustafizur Rahman, scored 109 not out in the second match at the same venue two days ago, having been recalled to the side for the series more than six years after he last played a one-day international for New Zealand. New Zealand were rarely troubled in their run chase, though faced injury concerns with Martin Guptill having to retire hurt after he pulled up while running an easy single. The visitors would rue wasting their good start when they lost Imrul in the 22nd over and scored just 39 runs in the next nine overs, while losing three wickets, and left too much for their lower-middle order and bowlers to do. Nurul Hasan scored an entertaining 44, which included a four and six on the first two balls of the final over by Matt Henry, who then took a good diving catch to dismiss the wicketkeeper and only conceded one run on the last three balls. The two sides now head to Napier for the first of their three Twenty20 matches on Jan. 3. -Reuters