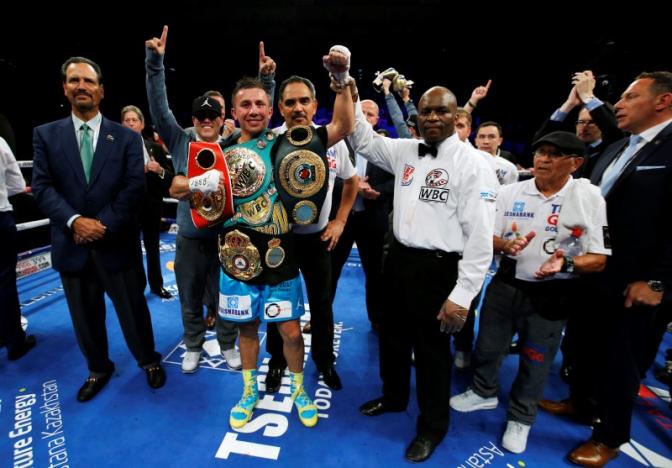 LONDON - Middleweight marauder Gennady Golovkin retained his WBC and IBF titles when challenger Kell Brook was pulled out by his corner five rounds into a compelling fight. Kazakh Golovkin had won his previous 22 fights by knockout but was rocked by unbeaten welterweight world champion Brook in the early exchanges before his superior power told. Brook, who suffered a suspected fractured eye socket, won the second round with a left uppercut that produced huge roars from the huge O2 Arena crowd, who were mainly supporting the British underdog. He was still standing his ground in the fourth but by the fifth it became clear the step up from welterweight to fight the man who has brutally dominated the middleweight division for six years was a step too far. There was little coming back as Golovkin landed some thumping blows and trainer Dominic Ingle threw in the towel which was initially unseen by the referee. Some of the crowd booed, but afterwards Brook said the eye injury had left him with restricted vision. Unbeaten Golovkin took his record to 36 wins. "Kell is a huge fighter, a very good fighter, but he's not a middleweight. I respect him, he is good, but not so strong," 34-year-old Golovkin said at ringside. "I respect Kell, he's a warrior. And his corner, for his career, for his family, was correct. It was game over." Brook was wobbled by a huge body shot in the first round but connected with a couple of stinging jabs. Golovkin has rarely been hurt in his outstanding career but he was marked around the face by the end of the second as the skilful Brook landed a fearsome uppercut. The 34-year-old Golovkin looked rattled in the third as he missed with some sledgehammer shots, although he landed enough to leave Brook's right eye swollen. The fourth round looked about even, with Golovkin relentlessly moving forward in search of the knockout and Brook countering with some precise jabs. There was a menace about Golovkin in the fifth though and he began to unload in devastating fashion, forcing the intervention of Brook's corner as the gallant Sheffield fighter tasted defeat for the first time in his 37-fight pro career. "He broke my eye socket in the second round. I was seeing three or four of him," Brook said. "Believe me, I hurt him. I saw his legs start to buckle. I was starting to settle in. I would fight him again." Golovkin, who remains the WBC, IBF and WBA champion, said his next target was a unification fight against another Briton, WBO titleholder Billy Joe Saunders. The WBA had refused to sanction Saturday's fight fearing Brook, who has spent his career fighting men 13 pounds (6 kg) lighter than Golovkin, was putting his health in danger. -Reuters Wallabies prop Ala'alatoa out of Pumas clash PRETORIA - Wallabies prop Allan Ala'alatoa has been ruled out of their Rugby Championship clash with Argentina next week in Perth after sustaining a knee injury in 23-17 victory over South Africa. The 22-year-old ACT Brumbies prop, who made his test debut earlier this year, was wearing a knee brace at Brisbane airport on Sunday and was heading to Sydney for further treatment rather than to Perth with the rest of the team, local media reported. Toby Smith and Tom Robertson have been called up as cover. "It's unfortunate but it's good to have those guys ready to roll," Australian assistant coach Nathan Grey told reporters. "He's been among a number of new guys who've come into that Wallaby set-up and really performed well. "That's what we want from all the guys coming in is to deliver their strengths." The Wallabies' victory ended a six-match losing streak stretching back to last year's Rugby World Cup final and released some of the pressure on coach Michael Cheika. Australia had started 2016 with high hopes of building on their run to the World Cup final and possibly even reclaiming the Bledisloe Cup from world champions New Zealand. A 3-0 series loss to England in June and then two successive hammerings at the hands of the All Blacks, which ensured the symbol of trans-Tasman supremacy remained in New Zealand, had led to the side being labelled the worst in a decade. The victory over the Springboks, while far from perfect, at least showed signs of improvement against a South African side still adapting to new coach Allister Coetzee. At times Australia looked like a side mindful they had lost their last six games and were desperate to break out of the slump. Veteran scrumhalf Will Genia continues to be among their best players and seems to be rekindling his old Queensland Reds combination with Quade Cooper. -Reuters