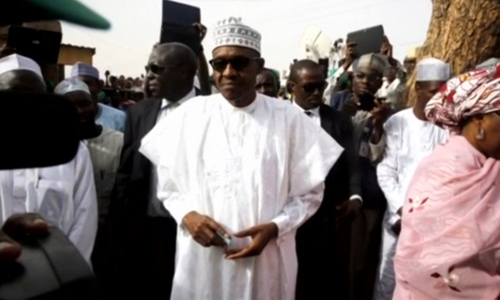 ABUJA - Nigerian opposition contender Muhammadu Buhari built a lead of over 2.5 million votes with only six states uncounted on Monday, raising the prospect of a stunning ballot box victory for a man who first came to power three decades ago via a military coup. The 72-year-old general who has campaigned as a born-again democrat intent on cleaning up the corrupt politics of Africa's most populous nation notched up 12.9 million votes, according to a tally collated by Reuters from 30 of Nigeria's 36 states. This compared to 10.2 million votes for President Goodluck Jonathan, a one-time zoology professor whose five years at the helm of the continent's biggest economy and top oil producer have been plagued by corruption scandals and a bloody insurgency by Islamist Boko Haram militants. For table of latest results, click on. There is still time for a reversal of fortunes, with one of Jonathan's big support bases in the oil-producing Niger Delta yet to report. Announcement of the results will resume at 0900 GMT on Tuesday, the election commission said. In Rivers state, the volatile and hotly contested home of Africa's biggest oil and gas industry, Jonathan won a massive 95 percent of the vote. Such results prompted suspicion among diplomats, observers and sympathizers of Buhari's All Progressives Congress (APC), some of whom took to the streets in protest. In the oil city of Port Harcourt, police fired tear gas at a crowd of 100 female APC supporters demonstrating outside the regional offices of the INEC election commission. "Their intention was to destroy INEC materials," a policeman at the scene told Reuters. "DISTURBING" The weekend vote was marred by technical glitches, arguments and occasional violence but in many places proved to be less chaotic than previous elections in the country of 170 million, which only got rid of military rule in 1999. At least 15 people were shot dead on polling day, most of them in the northeast where Boko Haram has declared war on democracy in its fight to revive a mediaeval caliphate in the sands of the southern Sahara. The United States and Britain said that after the vote there were worrying signs of political interference in the centralized tallying of the results. "So far, we have seen no evidence of systemic manipulation of the process," U.S. Secretary of State John Kerry and British Foreign Secretary Philip Hammond said in a joint statement. "But there are disturbing indications that the collation process, where the votes are finally counted, may be subject to deliberate political interference," they added. Such views are likely to fuel an APC belief of political skulduggery and increase the chances of a repeat of the 2011 post-election violence in which 800 people were killed, most of them in the predominantly Muslim north. Even before preliminary tallies were recorded, the party rejected the outcome in Rivers state and denounced the vote there as "a sham and a charade". Jonathan's People's Democratic Party (PDP) also painted itself as a victim of rigging, but said it would make no difference. "We are confident of victory," party spokesman Femi Fani-Kayode told journalists. "Any attempt to manipulate figures or to rig us out from any quarter will be firmly resisted." EYES ON COUNT, SAFETY World powers and international investors were closely watching the conduct of the poll to see whether one of Africa's most important states could improve its patchy record. Fitch cut Nigeria's credit outlook to negative early on Monday, citing the political uncertainty. However, the stock market climbed 1.7 percent, narrowly missing a three-week high in its seventh consecutive day in the black as domestic investors bet on a relatively smooth outcome. Bonds also gained, dealers said. The naira traded at 218 against the dollar on the black market, roughly in line with its levels before the election. "If there's no post-election violence, the market will rise," said Ayodeji Ebo, head of research at Afrinvest in Lagos. The northern city of Kaduna, the epicenter of three days of bloodletting after Buhari lost to Jonathan in 2011, was tense but quiet as results trickled in, with the roads void of traffic and many shops and homes shuttered. "People are too scared to come out," said Sani Umar, a 31-year-old trader who sells watches and sunglasses in the heart of city. "On a normal day, this place is crowded." Announcement of the results of this weekend's Nigerian elections will resume at 0900 GMT on Tuesday, the head of the election commission said late on Monday. With three quarters of states counted, opposition challenger Muhammadu Buhari led President Goodluck Jonathan by roughly 12 million votes to 10 million, according to a tally. - Reuters