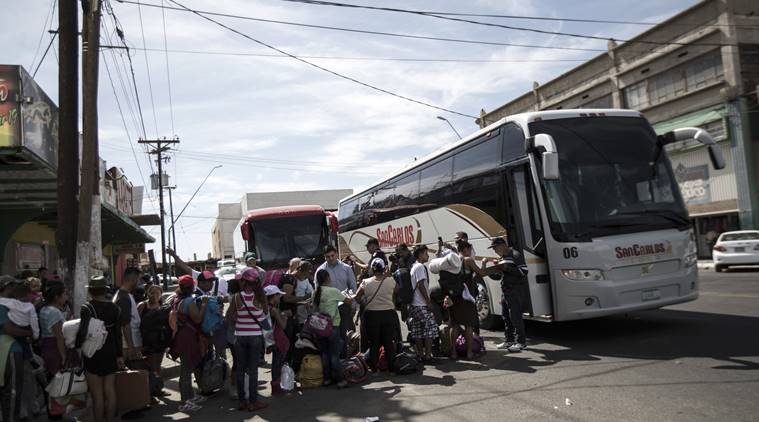 LOS ANGELES (Reuters) - With one week left on a court-ordered deadline to reunite children and parents separated by US immigration officials, government lawyers reported that 364 of some 2,500 families with children aged 5 and older have been brought back together.It was unclear from the status report, filed as part of an American Civil Liberties Union lawsuit challenging parent-child separations at the border, exactly how many more reunifications were likely. Of more than 2,500 parents identified as potentially eligible for having their children returned to them, 848 have been interviewed and cleared for reunification, attorneys for Immigration and Customs Enforcement (ICE) told the court. Another 229 parents have been deemed ineligible because of criminal records, or because they “waived” reunification or for other reasons. The rest are pending review. The report also said more than 700 of the parents in question have final deportation orders, though a federal judge has barred the expulsion of those parents until at least a week after they regain their children. The ACLU asked the judge to require the government to provide a list of all the adult immigrants with final deportation orders, saying those parents would need legal counsel about options for themselves and their children. Attorneys for the US government and the ACLU are due in court again on Friday for a status hearing before US District Judge Dana Sabraw in San Diego on reunification progress. The parents and children were separated as part of President Donald Trump’s “zero tolerance” crackdown on illegal immigration. Many of the families entered the United States illegally, while some sought asylum at border crossings, after fleeing violence and upheavals in their home countries. Children were sent to multiple care facilities across the United States, while their parents were incarcerated in immigration detention centres or federal prisons. Sabraw has said repeatedly that he expects the government to meet the deadline he has imposed. Federal officials have said that all children under the age of 5 who were separated have since been reunited.