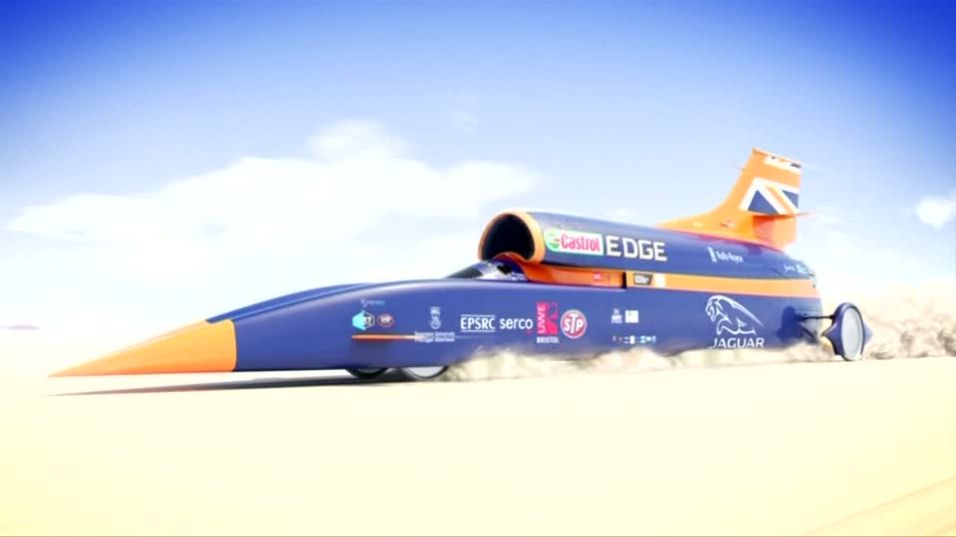 OKLAHOMA - Described as "part Formula 1 car, part space rocket and part supersonic jet", the Bloodhound Supersonic Car is aiming to be the world's first 1,000mph car when it attempts to set a new world record in 2016. The car's British designers say they are pushing the limits of science, with the Bloodhound a catalyst for cutting-edge research in fields such as aerodynamics and sustainable high-tech engineering. At their headquarters near Bristol, the Bloodhound team is busy constructing and assembling the vehicle's 3,500 bespoke components ahead of the car's unveiling in August. Bloodhound SSC (supersonic car) will be driven by Wing Commander Andy Green who set the current record of 763mph (1228kmh) at the wheel of ThrustSSC in 1997. Green said Bloodhound will travel faster than any fighter jet at low altitude, covering a mile in just 3.6 seconds. "Over the next year we're going to work it up to not just the new land speed record this year, but ultimately next year to 1,000 miles an hour. That's not only faster than any car in history, it's faster than any jet fighter has ever been at ground level," said Green, adding: "From a standing start, being twelve miles away two minutes after setting off - no car in history has ever done that before. This will be the first, and the fastest." During the 1,000mph record attempt, Green will travel faster than a bullet fired from a handgun thanks to three Nammo hybrid rockets combined with a Rolls-Royce EJ200 jet engine from a Eurofighter-Typhoon. "With a jet engine on its own we can get to about 600 mile an hour. When we're trying to go supersonic, what Andy will do is wind the jet engine up to full power and then at about 300 miles an hour he'll put the rocket on as well. And with both of those at full power it will get him through the sound barrier and up to 1,000 miles an hour," explained Bloodhound's chief engineer, Mark Chapman. The hybrid rocket motor is used for a very short burn time of about 20 seconds to accelerate the car to its peak speed, with a Supercharged Jaguar V8 engine driving the rocket pump. Chapman said it's these innovative hybrid rockets that are key to Bloodhound's pioneering technology: "If we're to say what part of the car is really the cutting edge science, it's how we're using that rocket. That is what's going to be the next generation of green propellents for rockets, it's the system we're using on this car." Bloodhound will accelerate from 0 - 1,050mph in 40 seconds. At maximum velocity the air pressure bearing down on its carbon fiber and titanium bodywork will exceed twelve tonnes per square meter. Its specially designed aluminum wheels will be rotating at over 10,000 rpm - 167 revolutions per second. Traveling at 1000mph, any stones or debris that is kicked up by the wheels could become a deadly projectile. The design team therefore came up with a bullet-proof exterior using panels made from millions of tightly woven glass threads that give driver Green enough protection without adding too much weight to the vehicle. The fighter pilot and land speed record holder admitted he will be slightly nervous when he climbs inside the vehicle's cockpit, but has absolute confidence in the team of experts building the Bloodhound. "Every single time I get in this car, I'm going to be slightly nervous... as we've pushed back the boundaries of physics in a car that is part Formula 1 car, part space rocket and part supersonic jet fighter. All of that world-class product, tens of thousands of people have input into this astonishing vehicle. Every single time I drive that, my driving has to be world-class to be worthy of that," said Green. In September 2015, the team will travel to Hakskeen Pan in Northern Cape, South Africa, to put the Bloodhound through its paces by attempting to set a new record of 800mph. This will allow the engineers and scientists involved to assess the car's performance ahead of the planned 1,000mph attempt in 2016. Described as "uncharted territory", the team will face the aerodynamic challenge of traveling far beyond the speed of sound (approx. 761 mph), with shockwaves pummeling the ground beneath the car's wheels; it's beyond what their computers can predict. - Reuters