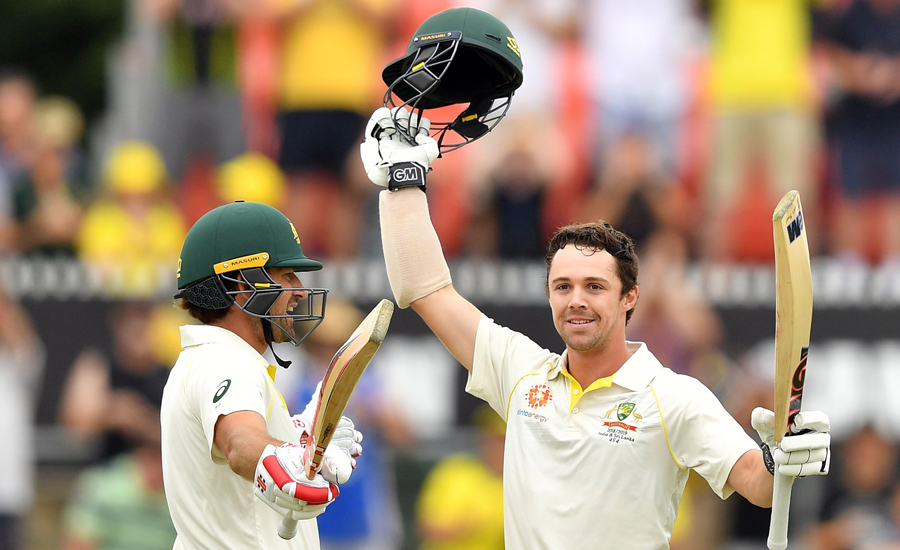 CANBERRA (Reuters) - Joe Burns and Travis Head smashed big hundreds to end Australia’s century drought and put the hosts on course for a massive first innings total despite a wobbly start against Sri Lanka’s makeshift attack in the second and final Test on Friday. Sri Lanka’s injury-depleted pace attack flattered to deceive on the opening day of the first ever Test at the Manuka Oval as Burns and Head forged a mammoth fourth-wicket stand of 308 to power the hosts to 384-4 at close after being reduced to 28-3. Burns, who had scored his last Test hundred against New Zealand in early 2016, was unbeaten on a career-best 172 after bringing up the first century by an Australian batsman since Usman Khawaja’s 141 in the drawn Dubai Test against Pakistan last October. Head completed his maiden Test ton before he was out on 161, following up on his 84 in the victory in Brisbane last week. Kurtis Patterson was batting on 25, after being dropped at short leg on the first ball he faced from Dhananjaya de Silva. “Coming into the day’s play, we knew that the first hour was going to be pretty tough,” Burns told reporters, saying he was “bloody happy” to have reached his first Test ton in three years. “So despite losing the three wickets, we knew that we just had to absorb that pressure that they posed to us. “But we were also aware that they were an inexperienced bowling attack that were going to present scoring opportunities if we could get through those tough periods.” On a chilly and overcast morning at the Manuka Oval, Australia captain Tim Paine finally had some luck with the coin toss, winning for only the second time in nine tests he had led the team in. But his joy was shortlived as Sri Lanka made early inroads despite being forced to go with a completely new pace attack with the injured Suranga Lakmal joining Dushmantha Chameera and Lahiru Kumara on the sidelines after playing the Gabba test. Left-armer Vishwa Fernando, who was not in the original squad and joined only as a replacement for Nuwan Pradeep, struck twice in two overs to dismiss left-handers Marcus Harris and Khawaja with his outswinging deliveries. Debutant Chamika Karunaratne then picked up a wicket with only his fourth delivery in test cricket, getting Marnus Labuschagne (six) to edge behind. The hosts, who lead the series 1-0 after their win in Brisbane by an innings and 40 runs, looked in deep trouble when Burns and Head combined to prop up the innings. As the new ball lost its shine and the Sri Lankan pacemen their swing, the batting pair grew in confidence and upped their scoring rate, finding the boundaries almost at will against Sri Lanka’s listless bowling on a docile pitch. Burns hit 26 fours in his unfinished 243-ball knock punishing a Sri Lankan pace attack with a combined experience of five Tests coming into the match. Head looked assured during his stay at the crease and hit 21 fours and a six in his 204-ball knock before becoming Fernando’s third victim. Both the centurions also benefitted from Sri Lanka’s sloppy catching. “We put down four catches and at best times in the match,” Karunaratne rued. “No one wants to miss a catch. Whole day we were on the ground, maybe the focus was not there,” he said.