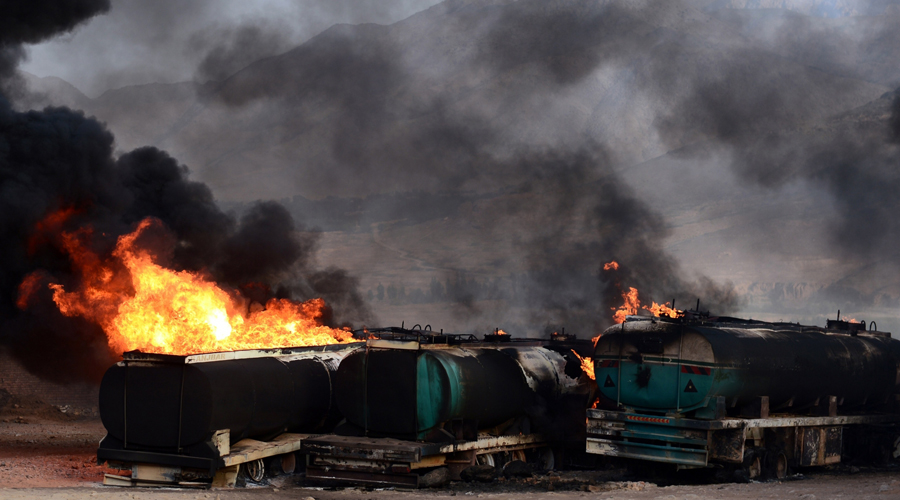 KANDHAR (92 News) - At least 38 people were killed and 28 injured in Afghanistan after a fuel tanker collided with a passenger bus, causing a massive explosion, local officials said. The incident took place on a major highway connecting the southern province of Kandahar with the capital city of Kabul. Ghulam Jilani Farahi, deputy police chief of Zabul province where the accident occurred, said authorities could identify only six bodies and the rest were totally burnt. He said several women and children were among the victims in the bus that was carrying more than 60 people. The driver of the oil tanker and a co-passenger died immediately after the truck burst into flames during the early morning hours on Sunday. The Kabul-Kandahar highway passes through militancy-prone areas and many bus drivers are known to drive recklessly at top speeds so as not to get caught in insurgent activity. Afghanistan has some of the world's most dangerous roads, often in dilapidated condition, and traffic rules are seldom enforced. Many in the country rely on old and rickety passenger vehicles, meaning that high casualty road traffic accidents are common. In May at least 73 people were killed when two passenger buses and an oil tanker burst into flames in a head-on collision in eastern Ghazni province, in one of the worst road accidents in the war-battered nation. And in April 2013 a bus hit a wrecked fuel tanker in the southern province of Kandahar, killing 45 people. The World Bank last November signed off a $250 million grant to upgrade roads crossing Afghanistan's Hindu Kush mountains, crucial trade links that are often closed in winter by snow.