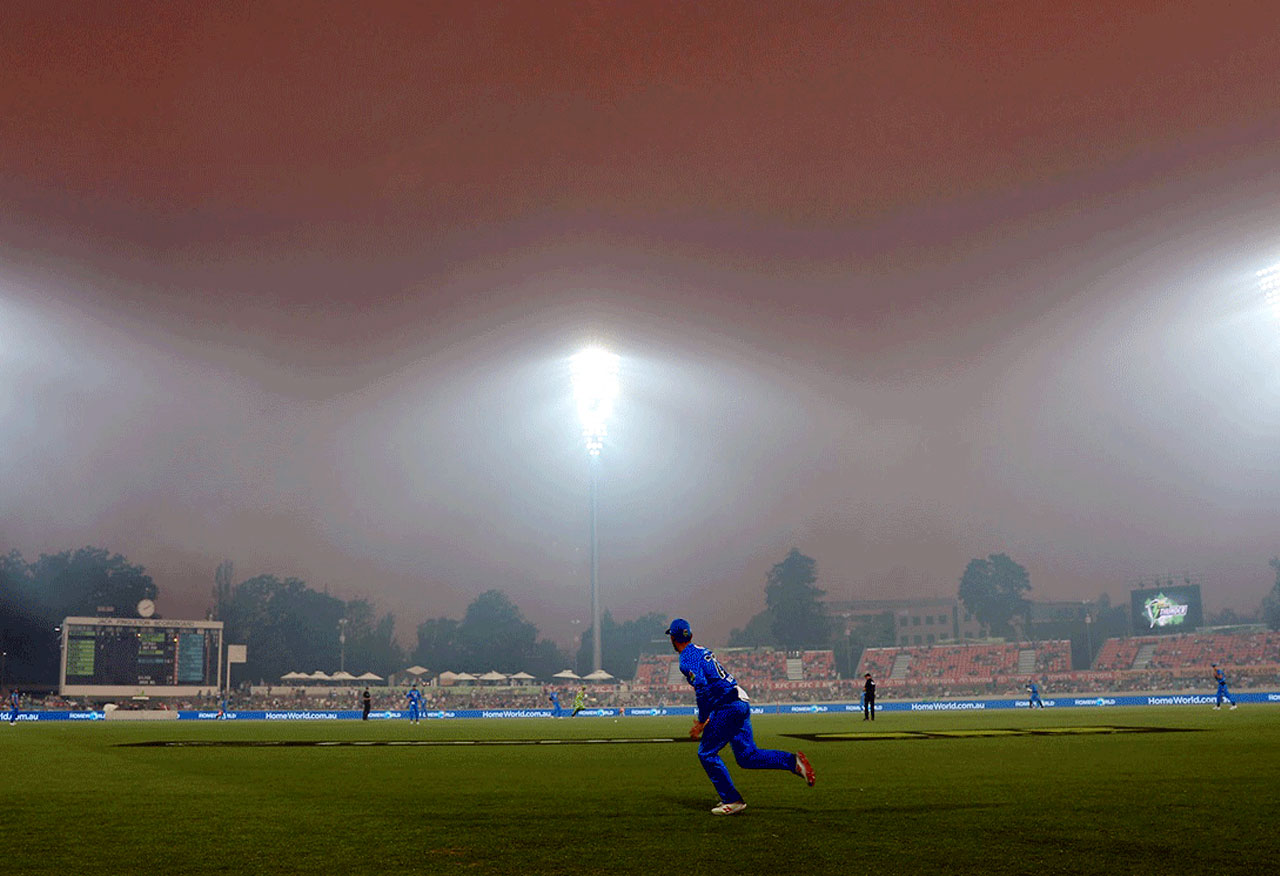 MELBOURNE (Reuters) – Hazardous smoke from bushfires raging over a large swath of eastern Australia have become a headache for the nation’s cricket board, which faces the threat of disruptions to its lucrative summer schedule. Match officials halted the Big Bash League (BBL) match between Sydney Thunder and Adelaide Strikers midway through due to “dangerous and unreasonable playing conditions” at Canberra’s Manuka Oval late on Saturday. A number of spectators required medical attention, while Adelaide’s test bowler Peter Siddle was unable to bowl more than two overs as the smoky haze at the ground thickened throughout the evening. With tinder-dry conditions and little rain forecast, wildfires may continue to burn for a number of weeks in New South Wales (NSW), which hosts the third test between Australia and New Zealand on Jan. 3 in state capital Sydney, the country’s most populous city, and a further five BBL games. “For Cricket Australia, it’s a challenge,” Thunder coach Shane Bond said post-match in Canberra. “I’m not quite sure what the process and protocols they’re going to have going forward. “Ultimately you just want to get it right so that fans don’t get sick and everyone’s clear in terms of the medical stuff as well.” Australia has been fighting wildfires for months as hot, dry conditions created an early start to the fire season, with blazes destroying more than 700 homes and nearly 3 million acres (1.2 million hectares) of bushland. More than 105 fires were still burning across NSW on Sunday, with 59 considered uncontained and one burning at an emergency level. Earlier this month, players complained of “toxic” conditions at the SCG during a Sheffield Shield match between NSW and Queensland which was blanketed in a smoky haze. Local soccer and rugby league federations postponed a number of youth matches across the state two weeks ago. The teams shared the points in the Twenty20 match in Canberra, which was called off in the fifth over of Thunder’s chase of 162. Thunder would have been awarded victory if the match was allowed to continue for another four balls, so long as they didn’t lose three or more wickets in those deliveries. Thunder captain Callum Ferguson was unhappy with the outcome but Bond was philosophical. “Visibility for us we thought was okay to finish the game,” he said. “But the air quality was poor, clearly. People went down (ill) in the stands.”