KARACHI (92 News) – Civil Aviation Authority (CAA) on Tuesday closed three routes for all international Karachi-bound flights and proposed three alternative routes. A notice to Airmen (NOTAM) issued by the aviation authority on Wednesday notified the changes. It said that all Karachi-bound flights will have to abide by the modifications from August 28 to August 31. The Civil Aviation Authority has also issued NOTAMN (Notices to Airmen). 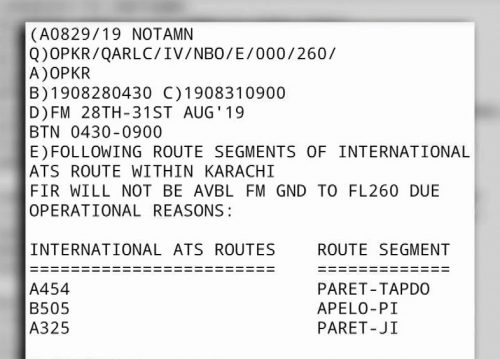 https://www.youtube.com/watch?v=NFvG7eRml9k The decision comes a day after Federal Science and Technology Minister Fawad Chaudhry said that Prime Minister Imran Khan is considering a complete closure of air space to India and a complete ban on use of Pakistan land routes for Indian trade to Afghanistan.

In a tweet on Tuesday, the minister said that these steps were suggested in the federal cabinet meeting and legal formalities for these decisions are under consideration. “Indian Prime Minister Narendra Modi has started and we will finish it,” he said. This isn’t the first time Pakistan has closed its airspace this year. A complete closure was put in place after Indian fighter jets violated Pakistani airspace on February 26. Airspace was completely opened on July 16, five months after the tensions grew in February. Indian Prime Minister Narendra Modi used Pakistan’s airspace to travel to France on August 22. He was given permission to use Pakistani airspace because there was no ban in place, the cabinet was told on Tuesday.
On June 12, demonstrating a stubborn behavior, Indian Prime Minister Narendra Modi refused to use the Pakistani airspace, despite receiving the permission from Islamabad. According to the Indian Today, that India had forwarded the request to Pakistani officials to let Modi’s overflight to Bishkek in Kyrgyzstan during June 13-14 to attend the Shanghai Cooperation Organisation (SCO) summit. The report said that Modi’s aircraft will not fly over the Pakistan airspace to Bishkek for the SCO summit, the Indian foreign ministry said. “The government of India had explored two options for the route to be taken by the VVIP aircraft to Bishkek. A decision has now been taken that the VVIP aircraft will fly via Oman, Iran and Central Asian countries on the way to Bishkek,” the official spokesperson said.