Cabinet endorses PM’s resolve to hold across board accountability 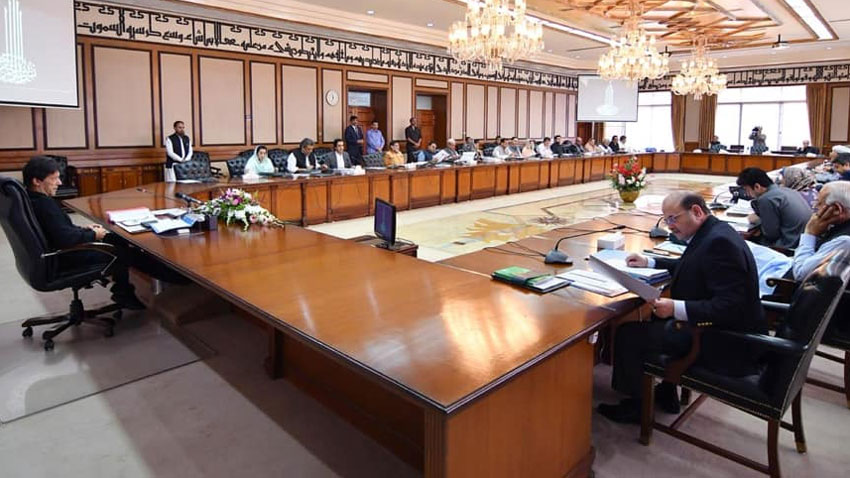 Cabinet endorses PM’s resolve to hold across board accountability

ISLAMABAD (92 News) – Federal Cabinet has endorsed Prime Minister Imran Khan's resolve for holding across the board accountability with the approach that no one is above the law. Special Assistant to Prime Minister on Information Dr Firdous Ashiq Awan said while addressing a press conference after a federal cabinet meeting. She revealed that the cabinet rejected the criticism directed at the government over the filing of references against judges of superior courts in the Supreme Judicial Council (SJC), saying there are no holy cows in any department and that the government will continue to pursue uniform justice for all. The special assistant said PTI government came to power to uphold justice and rule of law in the country. She said Law Minister Farogh Nasim briefed the cabinet in detail on facts leading to references forwarded to Supreme Judicial Council (SJC) about three judges. She said the cabinet endorsed forwarding of the reference to the SJC by the Law Ministry after stringent verifications. She also said the SJC is going to decide the matter, therefore, the media need not to hold debate or make speculations on the issue. Recalling the chain of events behind the filing of the references, Awan said the Assets Recovery Unit (ARU) of the Prime Minister’s Office had forwarded the complaints it received to the law ministry after verification and counter-verification. The law ministry then did a re-verification of its own before forwarding the summary to the president who then sent it to the SJC. She said the complaint had been "verified and ratified" by the UK land registry, notarized and endorsed by the High Commission of Pakistan in London. The special assistant said the cabinet ratified the decisions of ECC meeting held on 30th of last month. The cabinet was apprised in detail on the damage caused to wheat crop due to hailstorm and excessive rains. “It was told that over 27.9 million tons wheat is available as stock while consumption is 25.8 million tons, and there is no issue of food scarcity,” she informed. Earlier, Firdous Ashiq Awan said that the Supreme Judicial Council (SJC) has a code of conduct and its proceedings take place in secrecy, and the details cannot shared with the media. Addressing a news conference along with Adviser on Commerce, Textile, Industry, Production and Investment Abdul Razak Dawood, Firdous Awan said the SJC had issued notices to the attorney general and other stakeholders for a hearing on June 14. “Every politician, mediaman and member of judiciary has to follow a code of conduct,” she added. “The Supreme Judicial Council (SJC) has noticed attorney general of Pakistan for June 14 along with other stakeholders, due to binding law of the SJC demanding secrecy an in-camera briefing is held and till the SJC does not set terms and priorities pertaining to the verdict and gives us clear instructions, we are lawfully bound to not share that information with the media,” Awan opined. She announced that the law minister will hold a briefing on whatever decision is undertaken by the SJC. Responding to the statement of Pakistan Muslim League-N (PML-N) about reference filed against tw0 judges, the special assistant said that the people, who attacked on the judiciary in the past, now are talking about the respect of judiciary. On the other hand, the former Punjab information minister said that the PML-N attacked on the jurisdiction of the Supreme Court of Pakistan in the past.