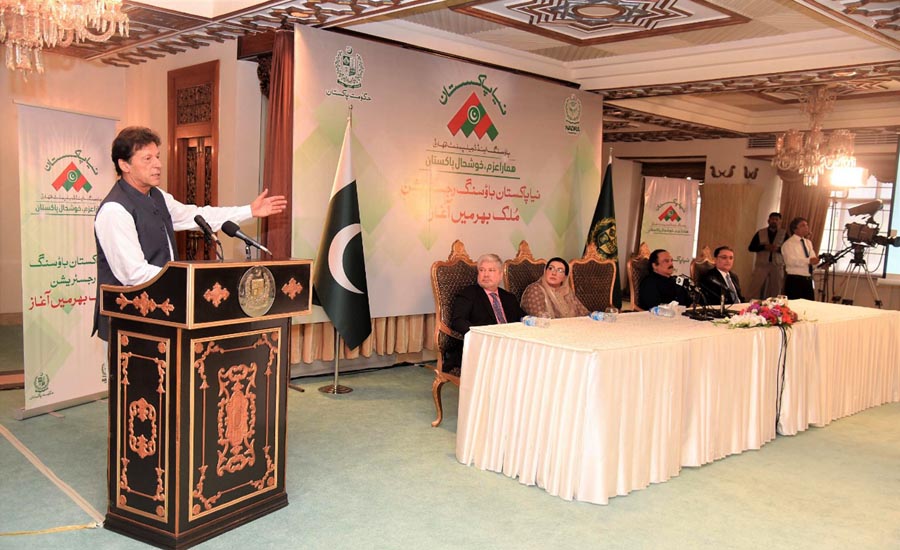 ISLAMABAD (92 News) – Prime Minister Imran Khan has announced that the federal cabinet will approve an ordinance on Tuesday, which will make the construction of houses easy. Addressing registration ceremony of Naya Pakistan Housing Program in Islamabad on Monday, he said that the houses will be constructed as per resources and demand. “Houses will be constructed for the lower strata first time in the country,” he said. The prime minister said that they were trying to form small construction companies. “The improvement in the housing sector will create 40 industries,” he declared. “The housing sector in Pakistan has lagged behind the regional countries due to lack of mortgage facilities to people by banks.” He said that the salaries class had no resources to construct the houses. “In Europe, houses are constructed after getting 80-90 percent loan from banks. Only 0.2 percent houses are constructed after getting loan from the banks,” he said. The prime minister said that housing is a basic need and there is a demand of 10 million housing units in the country. “Affordable housing will be provided to people who otherwise are not able to bear the high costs of constructing a house.” Imran Khan said that the purpose of registration is to get a clear picture of vital statistics relating to housing project including area preference, required finances and civic amenities. He said a comprehensive database would be prepared containing all vital information in this regard. He said that the government would facilitate new entrants to the housing business in order to encourage entrepreneurial culture in the educated youth. The prime minister said that the housing project launched on Angoori Road in Islamabad will be completed in one and half years' time while work on the housing program in other cities will start soon.

On July 11, Prime Minister Imran Khan laid the foundation stone of Naya Pakistan Housing Programme Zone IV in Islamabad. Addressing the ceremony, the prime minister announced to give the ownership rights to dwellers of ‘katchi abadis’. “The scheme is being launched from two ‘katchi abadis’ of Islamabad and the dwellers will be given the ownership rights in one and a half years,” he said. PM Imran Khan said that the salaried class will also be able to purchase a house under the scheme. “Foreign investors also want to invest in the scheme,” he said. He said that the housing units would be built on public-private partnership basis wherein the government would provide land and the private sector would construct housing units. “18,500 housing units will be built on this site, of which 10,000 will be allocated to people with lower income background.” The PM said that balloting would be held to choose the eligible people keeping in view the large number of applicants. “The number of people availing credit from banks for constructing their houses is very limited as mortgage practice is not very common in Pakistan's banking system. The government is working on a law to promote the culture of housing mortgage like several countries in the world,” he declared. Imran Khan said that the Naya Pakistan Housing Program would enable government servants and other people to get house at affordable installments. He vowed to provide housing facility to poor people living in shanty areas and slums of the country.