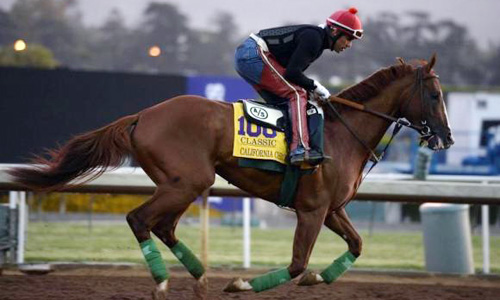 DUBAI - California Chrome's trainers say the Kentucky Derby and Preakness champion has been working well since his 25-hour flight to the Middle East where he will compete in the world's richest race on Saturday. The four-year-old is set to take on Godolphin's African Story, the 2014 winner, in the $10 million Dubai World Cup. "I was really happy with the way he shipped, with the way he trained here. I could not ask for him to do any better," said assistant trainer Alan Sherman. The 7-4 race favorite and 2014 American Horse of the Year clocked 50 seconds for half-a-mile at the new Meydan dirt track on Tuesday. California Chrome lost to Shared Belief in the San Antonio Stakes at Santa Anita, California in his last outing in February. That result however has not dimmed trainer Art Sherman's, father of Alan, confidence ahead of the 10-furlong race in Dubai that also features American runner Lea, 2014 Japan Cup winner Epiphaneia and another horse from the Godolphin stable, Prince Bishop. "You saw the two best handicap horses in America run in San Antonio in Shared Belief and my horse," he said. "We were like eight lengths in front of the next horse, a pretty good horse. "We have put a pretty good foundation down in Los Alamitos," added the trainer referring to their Californian base. "I worked him a lot faster than I usually work him, I do not want any excuses. He has been working fantastically there in Los Alamitos." After landing his Kentucky Derby and Preakness victories last year, California Chrome finished fourth in the Belmont Stakes, failing in his bid to become the first Triple Crown winner since Affirmed in 1978. His rags to riches story captured the imagination of the nation and drew swathes of followers. - REUTERS