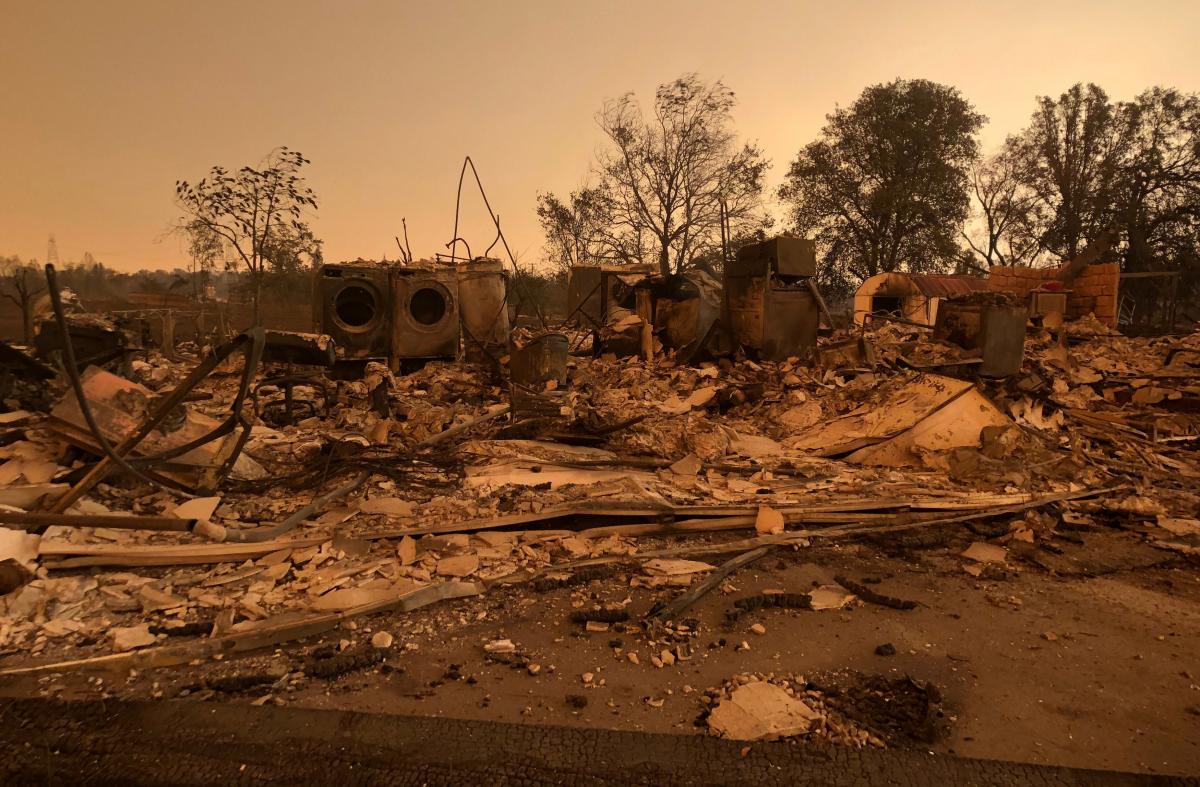 REDDING, Calif. (Reuters) - A fast-growing northern California wildfire killed a second firefighter after high winds drove it into the city of Redding, prompting mass evacuations, destroying scores of homes and threatening some 5,000 other dwellings and businesses, officials said. Flames raging in California’s scenic Shasta-Trinity area erupted into a firestorm that jumped across the Sacramento River and swept into the western side of Redding, home to about 90,000 people, forcing residents to flee. Firefighters and police “went into life-safety mode,” hustling door to door to usher civilians out of harm’s way, said Scott McLean, a spokesman for the California Department of Forestry and Fire Protection (CalFire). Streets in the Western town were all but deserted, with thick, sickly-brown smoke filling the air, and plumes of smoke rising to the west. Gale-force winds on Thursday night created a fire “tornado” said CalFire Director Ken Pimlott. “This fire was whipped up into a whirlwind of activity, uprooting trees, moving vehicles, moving parts of roadways,” Pimlott told a news briefing. Such highly erratic, storm-like wildfires have grown commonplace in the state, Pimlott said. “These are extreme conditions, this is how fires are in California,” he said. “We need to take heed and evacuate, evacuate, evacuate.” California has had its worst start to the fire season in a decade, with 289,727 acres burnt , according to National Interagency Fire Center (NIFC) data. Governor Jerry Brown requested emergency federal assistance to prevent an “imminent catastrophe” as Shasta County tried to find supplies and water for 30,000 evacuated residents and care for horses and cattle rescued from ranches and farms. CalFire reported 65 structures destroyed by the blaze, but McLean called that tally a “placeholder” figure that would grow significantly, with the number of homes lost likely to run into “the hundreds” as the scope of devastation was fully assessed.

The fire had scorched 44,450 acres (18,000 hectares) and was just 3 percent contained as ground crews, helicopters and airplanes battled the flames for a fifth day. High temperatures and low humidity were expected for the next seven to ten days, said Pimlott. “This fire is a long way from done,” he said. The blaze was one of nearly 90 large fires burning nationally, most of them in the West. One of those prompted the closure of much of California’s Yosemite National Park. Wildfires have blackened an estimated 4.15 million acres (1.68 million hectares) in the United States this year. That was well above average for the same period over the past 10 years but down from 5.27 million acres (2.13 million hectares) in the first seven months of 2017, NIFC reported. The blaze in Redding, about 150 miles (240 km) north of Sacramento, on Thursday killed a bulldozer operator working with fire teams to clear brush around the fire. A member of the Redding Fire Department was also reported killed .A Redding hospital said it had treated eight people, including three firefighters.

Rob Wright, 61, and his wife stayed to fight off flames with a high-powered water hose. “We were fortunate enough that the wind changed hours ago, and it is pushing the fire back,” said Wright .“We are just waiting it out ... crossing our fingers and hoping for the best.” Video and images posted on social media showed flames engulfing structures, as an orange glow lit up the sky. A Red Cross employee told local ABC affiliate KRCR-TV some 500 people took shelter in an evacuation centre at Shasta College. Motels were filled to capacity and livestock owners were told to take their animals to the town’s rodeo ground. The Carr Fire, the name given to the Redding blaze, was one of three fierce blazes threatening large populated areas. Cal Fire said the Cranston Fire, about 110 miles (177 km) east of Los Angeles had blackened 12,300 acres and was 16 percent contained. The Ferguson Fire near Yosemite, which has charred 46,675 acres, was 29 percent contained. A 32-year-old man was charged with setting the Cranston fire, along with eight other blazes, and faces a potential life sentence if convicted of the charges.