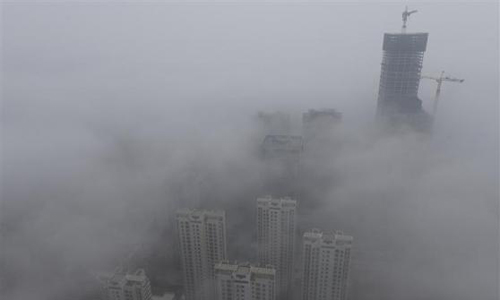 CALIFORNIA - California is suffering from "second-hand smog" drifting in from Asia and other places, researchers said on Tuesday, even as the state's prolonged drought has made air quality worse. About 10 percent of ozone pollution, the main ingredient in smog, in the state's San Joaquin Valley farm region comes from other countries, mostly in Asia, said Ian Faloona, an atmospheric scientist with the University of California, Davis. "What's happening upwind strongly affects what's happening downwind," Faloona said. If California were a human body, the area around the Golden Gate Bridge in San Francisco would be the mouth, "breathing in air from across the Pacific Ocean," he said. Faloona's conclusions, which are still preliminary, come during an increase in air pollution in the most populous U.S. state, as drought and warmer temperatures have triggered a spike in the number of winter days thick with soot and dirt. Faloona presented his findings at a conference near Yosemite National Park in California's Sierra Nevada mountains. His research, funded by the San Joaquin Valley Air Quality Management District, looked at pollution at higher elevations. "Secondhand smog from Asia and other international sources is finding its way into one of the nation’s most polluted air basins, the San Joaquin Valley," UC Davis said in a news release on Tuesday. The residents of the San Joaquin Valley have asthma at twice the rate of people in other parts of the state, the university said. Despite considerable improvement in California's notoriously troublesome air, the San Joaquin Valley recently missed a federal deadline for cleaning up its winter air of sooty particulates, a development blamed on warm, dry conditions and stagnant air. Last summer, California was out of compliance with federal ozone rules for 99 days in the San Joaquin Valley, up from 89 the year before. Sooty particulates, which cause brown haze in the late autumn and winter, were up throughout the state last winter. For December 2014 to February 2015, the South Coast Air Quality Management District, which covers Los Angeles, reported 24 days that failed to meet federal pollution rules, up from 16 in 2012-2013. Faloona urged regulators to look beyond regional pollution sources as they try to manage air quality. "Gradually we're starting to come to this understanding that pollution is actually of a larger scale than we originally planned for and thought about," Faloona said. - REUTERS