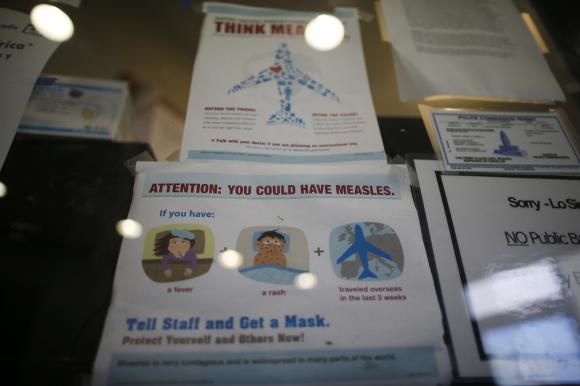 CALIFORNIA   (Reuters) California health officials warned parents against intentionally exposing their children to measles, which could worsen an outbreak in the state. In response to media inquiries about so-called measles parties, the California Department of Public Health (CDPH) said it did not have information on the parties or their frequency. But it added that the disease, of which 107 cases have been confirmed since an outbreak began late last year, was serious. "CDPH strongly recommends against the intentional exposure of children to measles as it unnecessarily places the exposed children at potentially grave risk and could contribute to further spread," said department spokeswoman Anita Gore. In 2011, federal authorities issued stern warnings following media reports that vaccine-wary parents were trading chicken pox-laced lollipops by mail, in misguided efforts to build children's immunity through exposure to the virus. More than a third of California's cases have been linked to an outbreak health officials believe began in the Disneyland theme park in Anaheim in December. Gore said 30 percent of people infected in the current outbreak have been hospitalized. More than 36 additional cases of the highly infectious disease have been reported in 19 other states and in Mexico, including three new cases diagnosed in Cook County, Illinois. Seven of the eight cases so far found in Cook County are associated with a daycare center in the city of Palatine. Georgia health officials reported that an infant arriving in Atlanta from outside the United States was confirmed to have measles, the state's first reported case of the disease since 2012. The Georgia case is unrelated to the California outbreak. The California Department of Public Health says 39 of the 107 confirmed cases have been linked to the Disneyland cluster. The measles outbreak has renewed a debate over the so-called anti-vaccination movement, in which fears about potential side effects of vaccines, fueled by now-debunked research suggesting a link to autism, have prompted a small minority of parents to refuse inoculations for their children. Some parents also opt not to have their children vaccinated for religious or other reasons. Measles was declared eliminated in the United States in 2000 after decades of intensive childhood vaccine efforts. But last year, it had its highest number of measles cases in 20 years. Most people recover from measles within a few weeks, although it can be fatal in some cases.