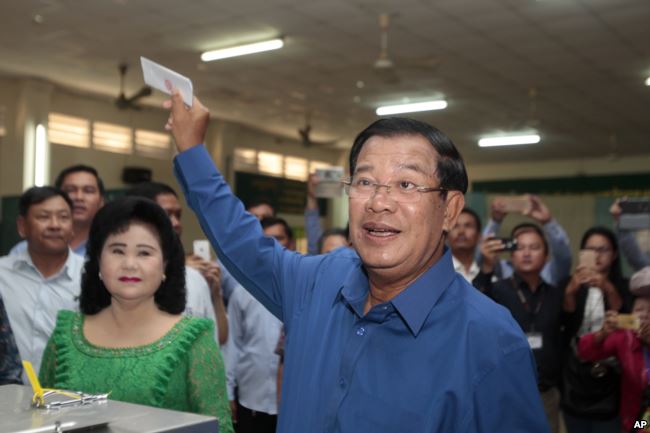 PHNOM PENH (Reuters) - Hundreds of Cambodians have changed profile pictures on Facebook in support of a government campaign to show their intention of choosing “stability” in general elections, despite widespread concerns that the July vote will not be free or fair. The campaign follows a call this week by the now-dissolved Cambodia National Rescue Party (CNRP), urging a boycott of the July 29 event as a “sham election” that will not reflect the will of the people. One of those who changed his Facebook profile, office worker Sok Pheaktra, 32, said, “It is normal that we vote, whether there is an opposition or not.” Interior ministry official Huy Vannak, who launched this week’s campaign, said he came up with the idea of featuring phrases such as, “We go to vote to keep peace and stability in our nation,” on the profiles. “This is called participatory democracy,” he told Reuters on Thursday, adding that the profile changes were voluntary. Critics say the election will almost certainly hand victory to Prime Minister Hun Sen, and extend his 33-year rule. Ahead of the election, Hun Sen has cracked down on critics, including the CNRP, which garnered support from a new generation of voters disillusioned at what it sees as the corruption that has stalked politics. The Supreme Court dissolved the CNRP last November at the request of the government, which accused the opposition party of plotting its overthrow with the help of the United States. The CNRP and the United States have denied the accusations, which followed the arrest of party leader Kem Sokha on treason charges he denies. Registration for political parties looking to run in July ended on Monday, with a national election panel hailing the prospect of multi-party democracy. On Thursday, it urged the government to act against growing calls to boycott the election. In a Facebook video posting, the Cambodia National Rescue Movement (CNRM), an opposition group launched by Sam Rainsy, a former CNRP leader, also called for an election boycott. “Cambodians won’t go to vote ... won’t vote for the dictator,” ran a song in the video, referring to Hun Sen.