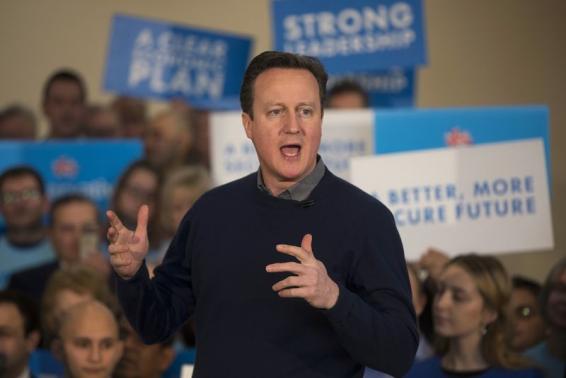 LONDON - Prime Minister David Cameron's Conservatives have a 4 percentage point lead over Labour, according to a YouGov opinion survey published on Tuesday, the largest lead the pollster has recorded for his party in over three years. Ahead of the May 7 general election, the YouGov poll published in The Sun newspaper put the Conservatives on 35 percent of the vote and Ed Miliband's Labour Party on 31 percent. That lead was the largest in a YouGov poll since January 20 2012, according to YouGov data. The poll, carried out on March 8 and 9, comes days after Cameron drew accusations of cowardice from rivals for ruling out a head-to-head televised debate with Miliband before of the election. The data will add to Conservative hopes that Cameron can now establish a bigger lead over Labour just weeks before what opinion polls show is likely to be one of the closest British elections in at least a generation. The Conservatives have been ahead in four of the last 10 YouGov polls, while only two have put Labour ahead. "In YouGov's daily poll we’ve reached the point that Conservative leads are a little more common than Labour ones," YouGov's director of political polling Anthony Wells said on his website. "I don't think we can confidently say the Tories are ahead … but I'm certainly no longer confident in saying that the underlying average is a small Labour lead either." A different poll, published on Monday by former Conservative Party vice-chairman Michael Ashcroft, also gave the Cameron's party a four-point advantage. A Populus also released on Monday put Labour 1 percentage point ahead of the Conservatives. The YouGov poll was based on a sample of 1,745 adults. - Reuters