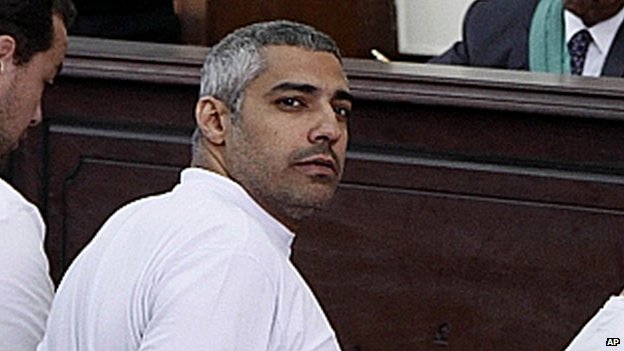 Canada is pushing Egypt to immediately release Al-Jazeera journalist Mohamed Fahmy, an Egyptian-Canadian who is set to be retried this week while also awaiting deportation. 'Canada is deeply concerned with the announcement that a retrial date has been set despite assurances that Mr Fahmy would be released along with his colleague, Peter Greste,' said Lynne Yelich, minister of state for consular affairs. 'Canada calls for the immediate release of Mr Fahmy,' she said in a statement. Fahmy and Egyptian Baher Mohamed, journalists with the Qatari-owned Al-Jazeera channel, were originally sentenced to up to 10 years in prison for allegedly aiding the blacklisted Muslim Brotherhood, along with Australia's Greste. But an appeals court overturned that verdict in January and ordered a retrial, which is to begin on Thursday. Greste was deported on February 1 under a presidential decree that allows the authorities to expel foreigners charged in Egypt and see them instead face trial in their home countries. In a bid to secure his own deportation, Fahmy has renounced his Egyptian nationality and is awaiting a return to Canada, where he also has citizenship.-Web Report