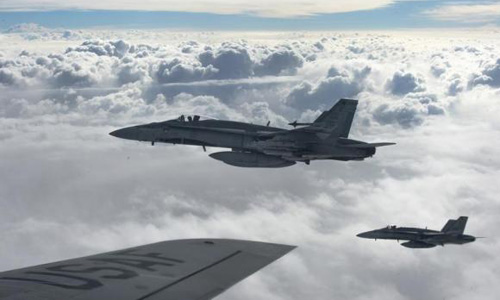 OTTAWA - Canada will expand its military mission against Islamic State by launching air strikes against the militants' safe havens in Syria as well as Iraq, Prime Minister Stephen Harper said on Tuesday. That will make Canada the second NATO member nation after the United States to attack Islamic State positions in Syria, which have also been hit by jets from Jordan and the United Arab Emirates. Harper also said Canada plans to extend its six-month mission against Islamic State by a year, to the end of March 2016. Canada has around 70 special forces troops in northern Iraq and six Canadian jets are taking part in U.S.-led bombing missions against Islamic State in Iraq. Harper, facing a tough challenge to retain power in October's general election, portrays rival political parties as weak on terror and says only his Conservatives properly understand the threat Islamic State poses to Canada. Both main opposition parties said expanding the mission would drag Canada deeper into a war it should have no part in. Harper told legislators that Canada must strike at the Syrian power base of the Islamic State, formally known as the Islamic State of Iraq and the Levant (ISIL). "ISIL's fighters and much of its heavier equipment are moving freely across the Iraqi border into Syria, in part for better protection against our air strikes ... ISIL must cease to have any safe haven in Syria," he said. Critics say bombing strikes in Syria will need the approval of President Bashar al-Assad, but Harper said Canada would "not seek the express consent of the Syrian government". The left-leaning New Democrats - the main opposition party - said Harper was dragging Canada into what could be a prolonged conflict. "This government is taking Canada from mission creep to mission leap .. Canada has no place in this war," said party leader Thomas Mulcair. Harper, who has until now insisted Canadian forces will not engage in fighting on the ground, notably softened his language on Tuesday. He told parliamentarians Canada and others must avoid ground combat responsibilities in Iraq "if we can", which was the first indication Canadian troops might one day be sent to the front. The centrist Liberals, who polls show have a chance of winning power in October, said they oppose expanding the mission. Party leader Justin Trudeau said Canada should focus instead on providing humanitarian aid to the region. - REUTERS