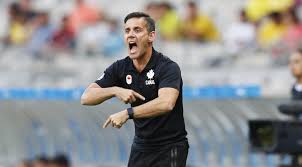 TORONTO (Reuters) - Canada have Costa Rica in their crosshairs as they begin their drive towards the 2022 World Cup but coach John Herdman says that with the right preparation they should eventually target regional heavyweights Mexico and the United States.
With the buzz from the Russia World Cup still in the air, Canada was out of the starting blocks quickly by unveiling “The Road to 2022 Begins” campaign this week, which they hope will earn them a ticket to Qatar in four years’ time. Having qualified only once for the World Cup, in 1986 when they lost all three group matches and failed to score, Herdman has been tasked with putting a plan in place that will end nearly four decades of failure. Herdman knows that for 2022 Mexico and the United States are likely to vie for the top spots in the CONCACAF region but says Canada can be the best of the rest and hopes to overhaul Costa Rica, who have qualified five times for the World Cup, including the last two. “The team we really need to go after in the next four years, and we can close the gap on, is Costa Rica,” said Herdman. “In many areas we have higher quality players than them in the depth of our team, we maybe lack the tier one players but we are not far off two or three players. “We’re right up there and then it comes down to things like sport science, proper management, relationship with clubs, a commitment from the guys to really buy into leaving the shirt in a better place.” Known as a meticulous planner and motivator, Herdman helped turn Canada into a women’s football powerhouse, guiding them to bronze medals at the 2012 and 2016 Olympics. Such rewards will be hard to come by in the men’s game, however. The CONCACAF region, which includes teams from North and Central America and the Caribbean, puts Canada up against sides with strong World Cup pedigrees in Mexico and the United States, while a host of smaller nations such as Honduras, El Salvador, Panama and Jamaica all regularly compete for berths. In Russia, Mexico made it to the last 16 but were knocked by Brazil, while Panama and Costa Rica did not win a match and finished bottom of their groups. “We’ve got eight to 12 years to get on par with Mexico and the U.S.,” said Herdman. “But the four-year project is Costa Rica and get ourselves away from Panama and Honduras that’s realistic. “The thing that have maybe tripped us up (in the past) is the mindset, the culture of the team, the sport science — if we get those things right then there is no excuses.”