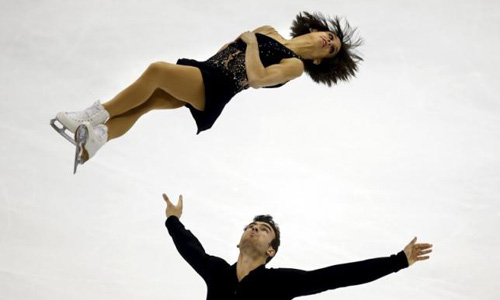 SHANGHAI - Canadians Meagan Duhamel and Eric Radford broke Chinese hearts by outclassing home favorites Sui Wenjing and Han Cong to win their first pairs title at the world figure skating championships in Shanghai on Thursday. With China hosting the event for the first time, there had been high hopes that Wenjing and Cong or stalwarts Pang Qing and Tong Jian would win the top prize in front of their boisterous fans. But Duhamel and Radford prevented twice former world champions Pang and Tong, lying second after the short skate, from enjoying a rousing finale to their 22-year partnership with a total score of 221.53. The Canadians were far from perfect, with Duhamel putting both hands down following a throw quadruple Salchow, while Radford lost his balance and went out of sync in the side-by-side combination spin. But their superior footwork and precision enabled them to become the first Canadians to win the pairs world title since Jamie Sale and David Pelletier in 2001. Wenjing and Cong leapfrogged their more experienced team mates thanks to a high-flying routine which opened with a soaring quad twist. They finished 7.41 points behind the winners and Pang and Tong had to settle for third in their final competition. A year after Julia Lipnitskya and Adelina Sotnikova were the toast of the Sochi Olympics, European champion Elizaveta Tuktamysheva set down the marker for a new generation of Russian women with a daring short program to Ravel's Bolero. Her gamble to perform a soaring triple Axel, which is rarely attempted by women, paid off and she backed it up superbly by nailing her triple Lutz and triple toe-triple toe combination to open a commanding 8.11 point lead over compatriot Elena Radionova. Japan’s Satoko Miyahara finished third, more than 10 points behind Tuktamysheva's personal best score of 77.62. “When I landed the triple Axel, I got goosebumps and I thought 'is this a dream or did I really just do the triple Axel at the World Championships?' I had to pull myself together after this," the 18-year-old said. "It was the first time for me to do a clean short with the triple Axel. It was a risk to do the triple Axel in the short program but figure skating has to evolve." While the Russians soared, the Americans tumbled on to the ice. Three-times U.S. national champion Ashley Wagner fell on her toeloop to finish 11th and Gracie Gold botched her opening triple-triple combination to lie eighth. - REUTERS