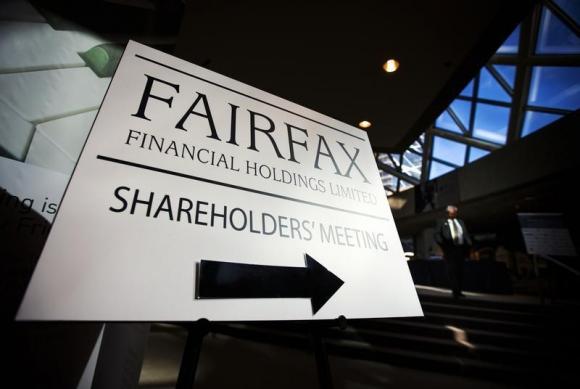 TORONTO (Reuters) - Fairfax Financial Holdings Ltd (FFH.TO), the Canadian property and casualty insurer run by contrarian investor Prem Watsa, said it would buy Brit Plc (BRIT.L) for about $1.88 billion to become one of the top five underwriters on the Lloyd's of London market. Brit shareholders will receive 305 pence per share in cash, comprising 280 pence in cash and an expected dividend of 25 pence per Brit share for the year ended Dec. 31. Brit shares jumped more than 10 percent to 303 pence, their highest since going public last year, on the London Stock Exchange on Tuesday. This was slightly below the offer price at a premium of 11.2 percent to Brit's closing price on Feb. 16. The deal comes a month after XL Group (XL.N) snapped up Lloyd's of London's Catlin Group (CGL.L) for $4.22 billion, and is the latest in a string of European insurance mergers as the region's 5,000 underwriters face stricter capital rules. Fairfax received hard irrevocable undertakings to accept the offer from entities managed by Apollo Global (APO.N) and CVC Capital Partners, which together hold about 73 percent of Brit's share capital. "Brit had only recently returned to the stockmarket and had not yet built real traction, so this represents an easy exit for its major shareholder," Joanna Parsons, an analyst with Westhouse Securities, wrote in a note. Apollo and CVC, which acquired Brit in 2010, took it public last year, valuing it up to 960 million pounds ($1.48 billion). GLOBAL APPETITE Toronto-based Fairfax said Brit's growing U.S. and international reach would complement its existing operations and allow Fairfax to further diversify its risk portfolio. Brit, with a market value of $1.69 billion, writes a range of specialty policies from energy and marine to insurance for horses and the launch of spacecraft. The acquisition is accretive to Fairfax on several metrics, including gross revenue per share and investments per share, it said in a statement. Earlier this month, Fairfax agreed to buy the Ukranian insurance operations of Australia's QBE Insurance Group (QBE.AX), expanding its presence in Eastern Europe. It snapped up QBE's Czech, Hungarian and Slovakian units in December. Fairfax bought Brit's runoff business in June 2012. In a runoff, an insurance company stops writing new business and only manages the existing book until all the policies in that book expire.