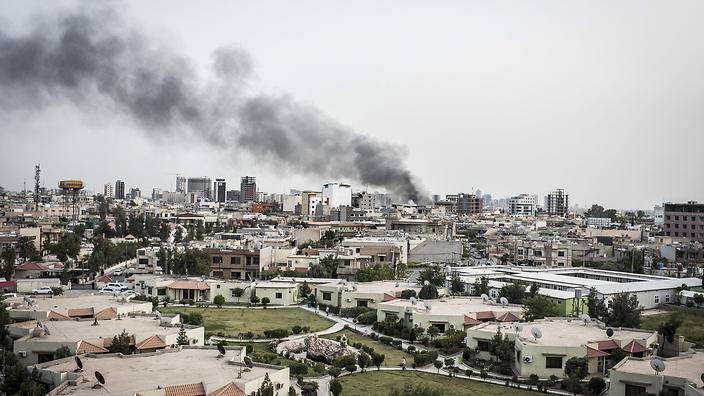 ERBIL - A car bombing claimed by the Islamic State killed three people on Friday outside the US consulate in Erbil, in a relatively rare attack in the capital of Iraq's Kurdistan region. No US personnel were hurt in the blast, according to the US State Department, which said a "vehicle-borne improvised explosive device" exploded right outside the entrance to the heavily fortified compound. Iraq's Kurdish region is an important partner for the US-led coalition in its campaign to "degrade and destroy" the Islamic State group, which overran large parts of Iraq last summer and threatened to reach Erbil. A Reuters witness heard the blast, which was followed by gunfire and a column of black smoke high above the Ankawa district, a predominantly Christian neighborhood packed with cafes popular with foreigners. "It seems the consulate was the target," Nihad Qoja, the mayor of Erbil's city center, told Reuters. The head of security for Ankawa said three people were killed and 14 wounded. "They (Islamic State) want to show they are present," Sherzad Farmand said. Islamic State also claimed responsibility for two car bombings in the Baghdad that killed at least 27 people on Friday. "The fighters of the Islamic State detonated two car bombs in the heart of the Iraqi capital this evening and a third in Erbil," the group said via its news agency. US officials said they found the Islamic State claim of responsibility for the Erbil consulate attack credible. "We have no reason to doubt their claim of responsibility," a US counter terrorism official told Reuters. Such attacks are relatively rare in Kurdistan, which has managed to insulate itself from the worst of the violence afflicting the rest of Iraq. The last major attack in Erbil, also claimed by Islamic State, was in November, when a suicide car bomber blew himself up outside the governor's office, killing five. - Reuters