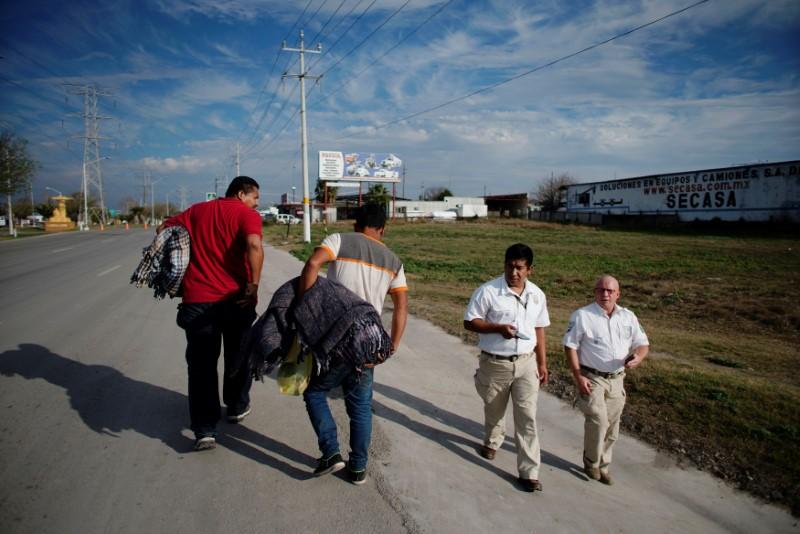 PIEDRAS NEGRAS, Mexico (Reuters) - Some Central American migrants seeking entry into the United States but stalled near a Texas crossing said on Wednesday they are considering moving to another part of the border, where they may have a better chance of lodging a speedy asylum claim. Mulling their next move from the dusty Mexican town of Piedras Negras, just south of the Eagle Pass crossing on the US side, the latest group of around 1,700 caravan migrants want to avoid a potentially months-long wait for a chance to plead their case for asylum. Many say they are also waiting for a so-called humanitarian visa from the Mexican government that could lead to local job opportunities, but are afraid of the area’s hyper-violent Zetas drug cartel that has targeted migrants in the past. “We can’t stop here,” said Oscar Lopez, a 33-year-old Honduran traveling with his wife and two daughters. He said that his family fled death threats from gangs back home. “If we don’t (cross) here, we’ll go to anther part of the border,” he said. U.S. President Donald Trump said on Tuesday that 3,750 additional military troops would be sent to the US-Mexico border to support border agents and thwart what he described as “the tremendous onslaught” of US-bound migrants. Asylum seekers have traditionally been granted the right to stay in the United States while their cases were decided by a US immigration judge, but a backlog of more than 800,000 cases means the process can take years. Some 250 military personnel are being re-deployed from positions in Arizona to Eagle Pass “in response to migrant caravan activity currently approaching the Texas border,” the US Department of Defense announced on Wednesday. The personnel includes military police, medical personnel and engineers. Thousands of mostly Central American migrants have made the dangerous trek through Mexico to the US border since October, stoking Trump’s ire. The Trump administration announced a policy on Dec. 20 that the United States will return non-Mexican migrants who cross the border back to Mexico while their asylum requests are processed. “These migrants face many risks,” including organized crime, corrupt local police and hostility from local residents, said Alberto Xicotencatl, who runs a shelter in the Coahuila state capital of Saltillo, about 250 miles (400 km) south of Piedras Negras. Earlier this week, Coahuila Governor Miguel Angel Riquelme said he would not permit the caravan migrants to cross his state, but he did not detail any specific measures. Hundreds of migrants from the first caravan remain stuck in the Mexican border city of Tijuana, many waiting their turn to legally enter and formally request asylum in the United States.