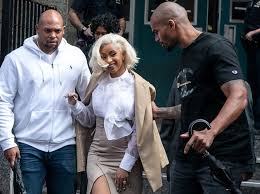 NEW YORK (Reuters) – A New York judge on Monday rescheduled Cardi B’s court hearing to Friday after she failed to appear in criminal court to face charges of assault in connection with a fight at a strip club but warned that she risked arrest if she did not show up again.
The 26-year-old performer, whose real name is Belcalis Almanzar, surrendered to police in October after being accused of involvement in the Aug. 15 incident at the Angels NYC strip club in the borough of Queens. Judge Scott Dunn told her lawyer “to convey to her that it’s not acceptable that she’s not here today,” after she failed to show up for her scheduled appearance.
“You should inform her that if she doesn’t show up to the arraignment on December 7, that unless the circumstances change, then it’s very likely the court will issue a bench warrant for her arrest,” Dunn said to her lawyer, Jeff Kern. Cardi B, a two-time Grammy award nominee, has topped music charts in recent years with hits “Bodak Yellow” and “Girls Like You,” a collaboration with Maroon 5. On her verified Instagram profile under the “Story” section, Cardi B early Monday posted a video featuring her on aircraft and another showing a vibrant blue ocean. There was no indication where the photos were taken or when she may have been at the locations. Kern, who admitted that he rarely had direct communication with Cardi B but spoke with her through business managers, apologized to the judge and blamed her failure to appear in court on poor communication. “I can tell you my client knew of the date, but there was a previously standing commitment for today and tomorrow,” he said, assuring the judge that his client was not a flight risk. Kern said Cardi B had asked for an adjournment before Monday but the court had denied it. She was initially due in court on Oct. 29, but the court allowed her to reschedule. According to the New York Times, Cardi B accused one of two sisters who tend bar at the Angels NYC club of having an affair with her husband, Offset, who is part of the rap trio Migos. Citing police, the newspaper said Cardi B’s bodyguards and members of her entourage attacked the sisters with bottles and chairs.
Cardi B’s agents and Joe Tacopina, an attorney representing the two bartenders, did not immediately respond to Reuters’ request for comment on Monday. She has also made headlines for an ongoing feud with rapper Nicki Minaj, with whom she had a physical altercation during an event at this year’s New York Fashion Week. After a series of posts on Twitter and Instagram directed at each other, the two agreed on a cease-fire in October.