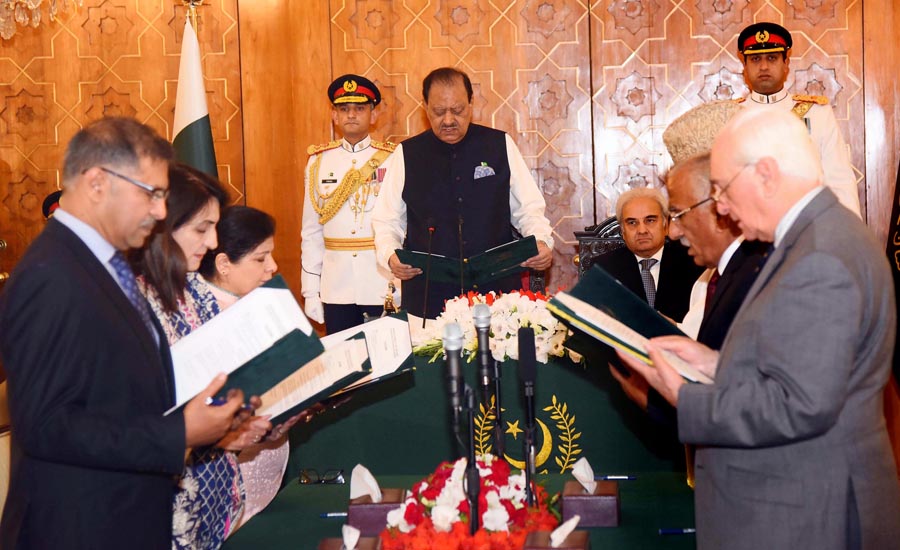 ISLAMABAD (92 News) – The six-member federal cabinet of Caretaker Prime Minister Justice (retd) Nasir-ul-Mulk took an oath of their portfolios at Aiwan-e-Sadr on Tuesday. President Mamnoon Hussain administered the oath to the federal ministers. Dr Shamshad Akhtar, Abdullah Hussain Haroon, Roshan Khurshid Barocha, Azam Khan, Syed Ali Zafar and Muhammad Yousaf took the oath. Former Pakistan Ambassador to the UN Abdullah Hussain Haroon has been given the portfolio of foreign minister, while SBP former Dr Shamshad Akhtar has been made finance minister. Syed Ali Zafar has been made Minister for Information Ministry and Law and Justice, while Azam Khan has been given the Interior and Anti-Narcotics Ministries. Senator Khurshid Barocha has been given the portfolio of Minister for Human Rights and Education, while Yousaf Sheikh has been made the Minister for Industry, Commerce and Port Shipping.