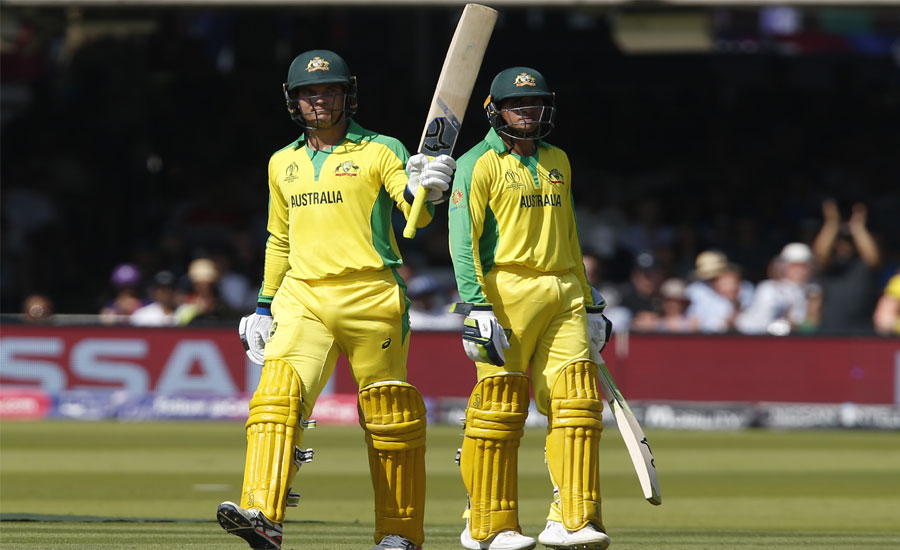 LONDON-A crucial sixth-wicket stand between Alex Carey and Usman Khawaja, followed by another virtuoso bowling display from Mitchell Starc, helped Australia to an 86-run win over New Zealand at Lord's on Saturday, 29 June. New Zealand enjoyed a fabulous start with the ball at a sunshine-filled Lord’s as the in-form opening pair of Aaron Finch and David Warner departed inside the opening Powerplay. Steve Smith then fell victim to an outstanding catch by Martin Guptill, who redeemed himself for a drop in the slip cordon off Khawaja with a flying effort at leg gully. Jimmy Neesham then displayed his own acrobatic talents with a brilliant return catch off Glenn Maxwell to have Australia 92/5 after 21.3 overs. Carey emerged to support Khawaja and took the lead in the partnership, the Australian wicketkeeper seemingly batting on another pitch, pulling and driving with timing that eluded most of his colleagues. The pair put on 107 to halt the onslaught of the Black Caps attack with Carey contributing 71 in the partnership before he fell in rather disappointing fashion: a chip into the hands of extra cover ending his stay. Khawaja ticked along with Pat Cummins at the other end, but his hopes of a first World Cup century were dashed by Trent Boult, who bowled three brilliant yorkers to claim the second hat-trick of the tournament, a stunning final over from the left-armer helping New Zealand restrict Australia to 243/9. Jason Behrendorff – arriving into the match on the back of a five-wicket haul against England – was excellent once more, removing New Zealand's watchful openers. On a sluggish wicket, Kane Williamson (40) and Ross Taylor (30) bid their time but Starc arrived to find the outside edge of the New Zealand skipper. Taylor then top-edged one high into the air with Carey taking an excellent catch to complement his vital knock earlier in the day. Colin de Grandhomme perished first ball to the leg-spin of Smith, holing out to Khawaja at long-off as Australia settled into cruise control, continuing to make regular breakthroughs; a stunning catch by Smith at midwicket to remove Tom Latham was undoubtedly the highlight of the lot. Starc came into his own and another World Cup five-wicket haul for the left-armer capped a perfect day for the table-toppers. It proved to be another resounding win for the Australians, who now have 14 points to their name with a game to play in the group stage.-ICC