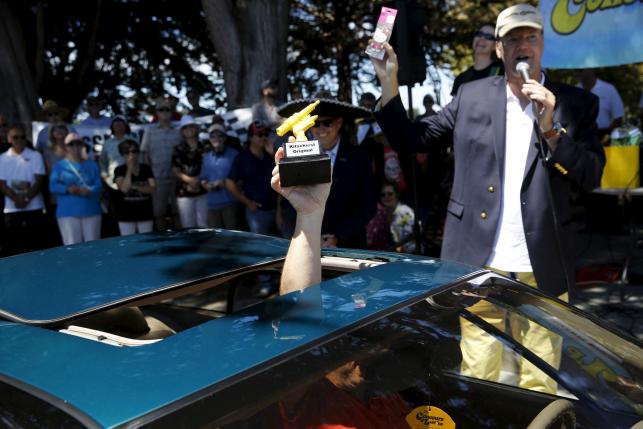 MONTEREY - When it began 65 years ago, the Pebble Beach Concours d'Elegance was just a one-day affair. Car enthusiasts raced around Pebble Beach's famed 17-Mile Drive and hung around afterwards to admire each other's hardware. Now the day has become a week. It includes road rallies, races, auctions, displays, seminars, exhibitions, parties and, underpinning it all, marketing. Lamborghini unveiled its newest model - the 700-horsepower, $400,000 Aventador - here Friday. Lalique, the crystal maker, Wednesday released a book about its history of "car mascots," aka hood ornaments. Tesla has a display tent. Rolex, Credit Suisse and others sponsor events. Korea's Kia hopes to creep into the luxury market by offering test drives of its K900 sedan, which is priced at $54,000 and up. The week's events are spread throughout the Monterey region, from the tony-rustic Carmel Valley to the gritty working-class town of Seaside, home to Saturday's tongue-in-cheek Concours d'Lemons. It's a deliberately downscale celebration of Edsels, Gremlins, Corvairs and Yugos - some of history's worst cars. Sunday's Concours d'Elegance, on the 18th fairway of the Pebble Beach golf course, is focused instead on finery, with Ferraris, Bugattis, Hispano-Suizas and other rarified cars competing for Best-in-Show honors. Expected attendance for the day is up to 25,000 at the show itself, and more at side events. Hard-core enthusiasts arrive for the 6 a.m. "Dawn Patrol" to watch the 200-or-so cars on display, all by invitation only, roll onto the 18th fairway while the morning mist rolls in from the adjacent Monterey Bay. This year's featured categories and classes include Ferrari, pre-war British sports cars and the Lincoln Continental on its 75th anniversary year. "It's the Super Bowl of car shows," says Dave Magers, CEO of Mecum Auctions, which this weekend sold a Porsche once owned by the late actor Steve McQueen for $1.95 million. At the swank Bonhams auction at Carmel Valley's Quail Lodge, some cars could fetch more than 10 times that price. All told, collectors are expected to spend more than $400 million on cars sold at auction during the week. The week of excess everything includes epic traffic jams that can stretch for miles along California Highway 1. "As a resident, we hate it," says retiree Marty Goss, a long-time Carmel resident. "It's a huge influx of traffic and people. But it is great for the local economy." Indeed, the local convention bureau expects more than 85,000 visitors will drop more than $50 million on hotel rooms, restaurants and bar tabs. Concours proceeds go to local charities. The number of Car Week events has proliferated such that Sports Car Market, a collectors magazine, publishes a special Monterey issue that offers attendees blunt advice. "Get up early to avoid traffic," the magazine states, "and carefully pick your events to avoid epic burnout." -Reuters