Cartwheeling Hassan an unlikely star of the World Cup 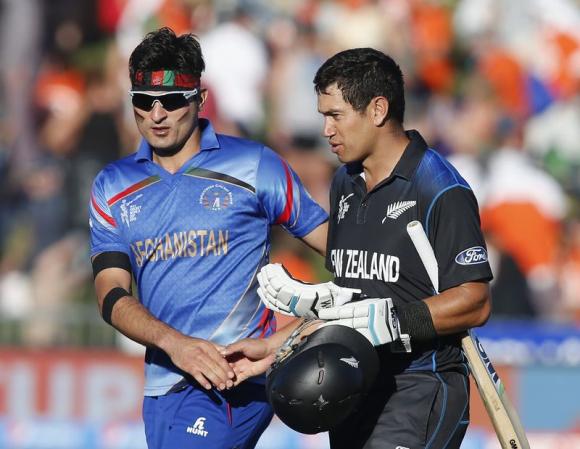 Cartwheeling Hassan an unlikely star of the World Cup

MELBOURNE - At a World Cup where millionaires and refugees share the same stage, it is little surprise that one of the standouts of the tournament is also one of the most unlikely. With his face covered in warpaint and his hair kept in place by a bandana in the Afghan flag colours, Hamid Hassan has emerged as one of the cult figures of the World Cup. Few cricket supporters had even heard of the Afghanistan fast bowler before he arrived at the World Cup but he has quickly won over the crowds in Australia and New Zealand with his unbridled enthusiasm and clumsy celebrations. Like most of his team mates, Hassan came to cricket by accident, learning the game as a child in Pakistan, where his family moved in exile because of the war in their homeland. His family did not initially share his love of cricket, preferring that he spent his time on his studies, so he played and trained in secret. A natural talent, he was picked to play for his national team in 2006 for a tour of England and caught the eye of the Marylebone Cricket Club. He was offered a job as a groundsman and a year later he became the first Afghani to play at Lord's. The following year, he joined the Lancashire League and was picked to play for Afghanistan in the 2009 World Cup qualifiers. Afghanistan failed to qualify for the World Cup but were awarded One-Day International status for four years on the back of their results, which included a win over Ireland. Hassan took 5-23 against the Irish and was named man of the match. His family, who had finally warmed to the sport, celebrated his achievement by sacrificing a lamb and giving it to the poorest people in their village. Hassan played at the 2010 Twenty20 World Cup and had a key role in helping Afghanistan qualify for the 50-over tournament. The 27-year-old has captured seven wickets in the tournament, including three against Sri Lanka. His biggest scalp was Kumar Sangakkara, which he celebrated with an attempted cartwheel that didn't exactly go to plan but went viral on the internet and added to his cult following. "I didn't know what I should do so I just went for it," he explained to cricket.com.au. "I was just enjoying that wicket because everyone knows that Sangakkara is the number one batsman in the world. "I feel very proud that I got him and also then (Mahela) Jayawardene later on. "I was very excited, I didn't know what to do and it just happened. It was amazing." Afghanistan's World Cup adventure ends on Friday when they play England at the Sydney Cricket Ground. Drawn in the same group as Australia, New Zealand, Sri Lanka, Bangladesh, Scotland and England, they were never expected to reach the knockout stage. But they will return home with at least one win after defeating Scotland by one wicket in a thriller in Dunedin with Hassan taking a wicket, a vital catch, scoring an unbeaten 15 and sharing an unbroken 10th wicket stand of 19 to seal the victory. "There's been so many amazing moments that have happened in the past 10 years and we never knew we would become an international team and qualify for the World Cup," he said. "It's been an amazing journey and for me there's been some unforgettable moments and right now I'm part of this World Cup with my team." - Reuters