ISLAMABAD (92 News) – A case has been registered against 70 workers of Pakistan People’s Party (PPP), who protested outside the National Accountability Bureau after Bilawal Bhutto and former president Asif Zardari appeared before it in relation to fake accounts case. According to the details, Police has also nominated PPP Senator Mustafa Nawaz Khokar and Raja Shakeel Abbasi in the case. The federal police presented 20 under-arrest PPP members before the Judicial Magistrate Saqib Jawad’s court. The arrested workers were sent to jail on a judicial remand until April 4. The judge said the workers will be presented before the same court until a challan is submitted against them. Senator Mustafa Nawaz Khokhar, the spokesperson for PPP Chairman Bilawal Bhutto-Zardari, was granted pre-arrest interim bail by a sessions court in Islamabad on Thursday along with PPP Islamabad chapter President Raja Shakeel. The FIR was registered under Section 147 (punishment for rioting), Section 186 (obstructing a public servant in discharge of public functions), Section 149 (unlawful assembly), Section 188 (disobedience to order duly promulgated by public servant), Section 341 (punishment for wrongful restraint), Section 109 (punishment of abetment if the act abetted committed in consequence and where no express provision is made for its punishment) and Section 353 (assault) of the Pakistan Penal Code. 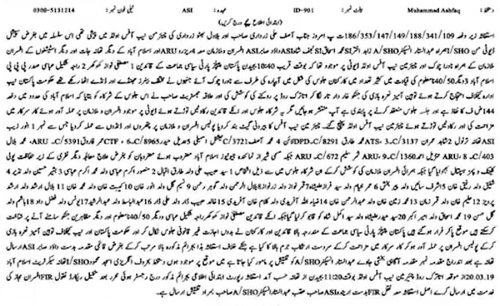 As per the FIR, in addition to the above, there were about 40 to 50 others who had also committed the offences but managed to escape from the scene. PPP leader Qamar Zaman Kaira claimed more than 200 party workers were arrested and at least 50 workers were missing, as clashes erupted between the workers and police outside the NAB Rawalpindi head office. The workers, who had gathered to welcome their leaders, allegedly pelted stones at police officers who tried to stop them at Nadra Chowk. At least six policemen were injured in the clashes, police officials said. On Wednesday, the Secretariat Police Station had registered a First Information Report (FIR) against Khokhar, Shakeel as well as others for rioting and attacking police officials during Bilawal and Asif Ali Zardari's appearance before NAB Rawalpindi earlier the same day.