Castro leads by one at weather-hit BMW 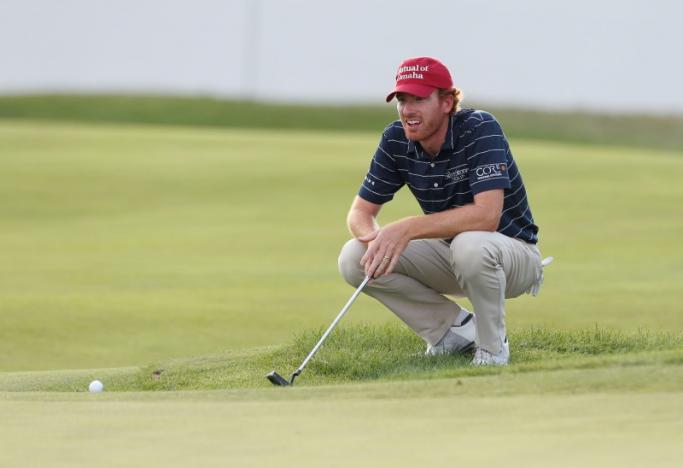 Castro leads by one at weather-hit BMW

Roberto Castro upstaged some of the biggest names in golf to take a one-shot lead at the rain-hit BMW Championship with a seven-under-par 65, while defending champ Jason Day ended the day eight strokes back after a six bogey 73. FedEx Cup points leader Patrick Reed managed a respectable two-under 70 while Rory McIlroy, winner of the Deutsche Bank Championship on Monday, was three-under after 10 holes. Castro reeled off eight birdies before missing a six-foot par putt at 18 at Crooked Stick in Carmel. He was among 33 players who completed their rounds, while the other 36 will resume early on Friday in the third of the PGA Tour's four FedEx Cup playoff events. Brian Harmon trails by one stroke, while major champions Dustin Johnson and Jason Dufner shot 67s and sit two back. U.S. Open champion Johnson was challenging for the lead until making bogey on the par-four 18th. Castro is hoping to make a name for himself on the same Pete Dye-designed course where long-hitting John Daly emerged from obscurity to win the 1991 PGA Championship. He said he tended to thrive on the challenge of playing a course with danger lurking at every corner. "I do better on tougher courses sometimes," he told reporters. "It snaps me into focus. (On) Pete Dye courses there are a lot of shots where it's do or die, so I think it probably helps me. "It's great to be one of the top 70 this year. I told myself the last two weeks really to play like I have nothing to lose. Making a bunch of birdies is a good way to start." Castro also said the thunderstorms that stopped play for more than three hours had drastically changed the complexion of the course. "It was very different before and after. It was really firm before the delay. The greens were firm. And then after the delay really softened up." -Reuters