Catalans march in Brussels to 'wake up Europe' 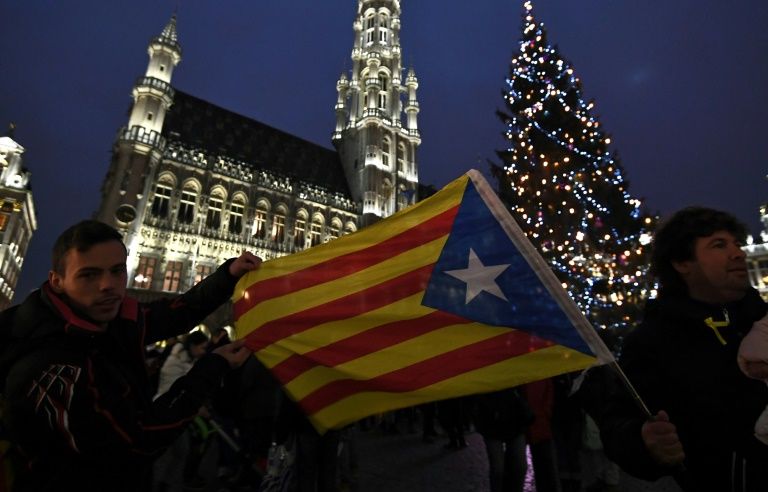 Catalans march in Brussels to 'wake up Europe'

BRUSSELS (AFP)  Hundreds of Catalan protesters began gathering in Brussels on Thursday to show support for deposed president Carles Puigdemont and urge the EU to support their drive for independence from Spain.

Chanting "Wake up Europe!" and waving Catalonia's red, yellow and blue Estelada separatist flag, demonstrators gathered in a park near the headquarters of the European Union ahead of a march through the Belgian capital.

"We cannot abandon our president, who is in exile here," Antoni Llenas, 59, a protester wearing a flag over his shoulders, told AFP. "We are here to continue the struggle for our independence and to ask for the freedom of our political prisoners."

Belgian police were on hand but the early stages of the protest were peaceful, AFP reporters said.

Puigdemont and four former ministers fled to Brussels in November, saying they wanted to take their cause to a European level after Spain charged them with sedition and rebellion over Catalonia's independence referendum in October.

Madrid dropped a European arrest warrant for the five on Monday but Puigdemont said he would stay put for now as they still face arrest in Spain if they return for snap regional polls in Catalonia on December 21.

Organisers said they expected around 20,000 people to attend Thursday's march.

Protesters arrived in a stream of coaches and camper vans with Spanish registration plates and gathered in the Cinquantenaire Park in Brussels' European quarter before the start of the march at 1030 GMT.

Their route will take them past the headquarters of the European Commission and end up in a square between the European Council and European Parliament, the three main EU institutions.

The EU has strongly backed the Spanish government over the Catalan issue, saying that it is an internal matter for Madrid.