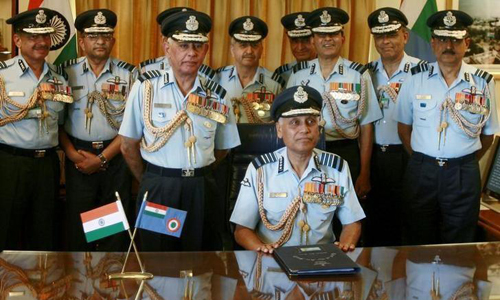 NEW DELHI - The Central Bureau of Investigation (CBI) arrested the former head of the air force, retired air chief marshal S.P. Tyagi, on Friday in an investigation into allegations of bribery in a contract to buy for a dozen AgustaWestland helicopters, an official said. Tyagi, 71, has been at the centre of allegations of impropriety in the 560 million-euro ($590 million) deal to buy the helicopters from AgustaWestland, a unit of the Italian defence group Leonardo-Finmeccanica. The deal was cancelled in 2014 after Finmeccanica's then chief executive, Giuseppe Orsi, was arrested on suspicion of paying bribes to secure the order for the helicopters, which were meant to fly senior Indian politicians.
Tyagi was arrested on Friday along with a cousin of his and a lawyer, an official of the CBI said. The CBI has filed a complaint against the three men alleging offences including cheating, bribery and money laundering, the official said.
"There is sufficient evidence against them for us to arrest them," the official said. The men will appear in court on Saturday and formal charges will be drawn up later on. The three men could not be reached for comment. Tyagi has in the past said that he is innocent in the affair. Orsi was in April sentenced to four and a half years in prison in Italy for corruption and falsifying invoices. India is one of the world's biggest arms importers but critics say its procurement process is not transparent, and that millions of dollars have often been paid to politicians and top government and military officials to swing deals. -Reuters