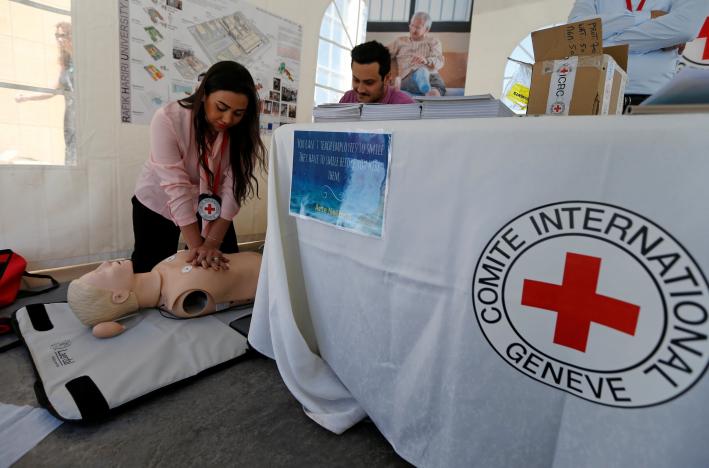 BEIRUT – The Middle East's protracted conflicts have caused a region-wide health crisis that goes beyond war wounds to heightened resistance to antibiotics and a collapse in vaccination drives, leading to a resurgence of diseases tamed in peacetime.

Health threats are so varied that one of the Middle East's main teaching hospitals, the American University of Beirut Medical Centre, has introduced a conflict-medicine programme to equip students to cope in an environment afflicted by chaos.

"What you need is a completely different way of viewing war-related ill health that goes beyond the shrapnel, bullets and the blast injury and looks at the bigger system," said Ghassan Abu-Sittah, co-head of the AUBMC programme.

As fighting has engulfed Syria, Iraq, Yemen and Libya since 2011, doctors and nurses have had to adjust not only to treating terrible injuries but to a faster spread of disease and growing threats to their own safety from combatants.

The International Committee of the Red Cross (ICRC) warned on Sunday that the drawn-out crises plaguing the Middle East "could lead to the total collapse of health systems".

Doctors, universities and aid agencies must respond by sharing experience and expertise, and by adapting research and medical practices, said Abu-Sittah and other participants at a conflict medicine conference at AUBMC.

One growing problem is the disruption of vaccinations. Ali Batarfi, dean of the Hadramawt College of Medicine in Mukalla, Yemen, described a recrudescence of dengue fever that had been comparatively rare before the war there.

"These children, they will not be vaccinated, so the disease which was eradicated will emerge again," he said.

Yemen is suffering from a cholera outbreak after more than two years of a war that has crippled public services, fostered malnutrition, hindered the import of adequate medical supplies and hobbled hospital capacity with war injuries.

The collapse in national health systems has accelerated resistance to antibiotics because of drug usage in excess of prescribed limits. At the same time, infections have spread as war has destroyed sanitation and clean water systems and triggered chaotic population movements.

The impact ripples beyond countries at war. Lebanon's health system has grappled with the extra patients from around the war-ridden region attending its hospitals, including some from the more than one million Syrian refugees now in the country.

"Conflict-related ill health is a big part of the disease load that we are facing and that the medical students that we teach will be facing in the next 20 years," said Abu-Sittah.

A fifth of patients at AUBC are from Syria and Iraq, of whom the overwhelming majority suffered from war wounds, though the burns department noted a big rise in cases among children because of tent fires in refugee camps.

Doctors in war zones have had to radically alter their approach, rationing resources, operating in primitive conditions and changing the way they treat trauma injuries.

"Sometimes you operate under a tree. But you bring scientifically based surgical care even if not everything is perfect," said Dr Christos Giannou, a veteran conflict surgeon who co-wrote the ICRC war surgery manual. "You make compromises and you have to use your imagination."

Surgical treatment of injuries is very different when those wounds have been caused by high-velocity bullets or shrapnel - something traditionally trained surgeons must learn as war has spread in the Middle East.

In Mukalla, Batarfi said, a Syrian doctor with war experience had helped advise his team on ways to adapt to conflict. War had isolated the southern Yemeni region, broken supply chains and cut the electricity supply.

"They stop doing routine operations because if they conduct (them) as usual they will face the problem of no oxygen. There are no materials for the operation: sutures, gauze, all the equipment," he said.

Sometimes new technology is useful, like the social networking group that doctors in embattled areas of Syria are using to seek guidance and advice from surgeons abroad in treatment of limb injuries, sharing x-rays and case histories.

But without access to new or replacement equipment, and with electricity often out for long stretches, sometimes more traditional methods work better, such as clinical examinations rather than electricity-thirsty CT scans.

"People (once) practiced very good medicine (and) surgery without all of this sophisticated technology available today and it's a good thing to remind them of that," Giannou said.

Increasingly, warring sides in conflicts are targeting medical facilities, seemingly aiming to reduce their enemies' stomach for battle by aggravating the suffering of civilians.

"When I started for MSF, my MSF jacket was my bullet-proof vest," said Dr Anja Wolz, emergency coordinator at Medecins Sans Frontieres in Brussels, who has worked recently at the MSF field hospital in Mosul. "Now you feel like a target." –Reuters