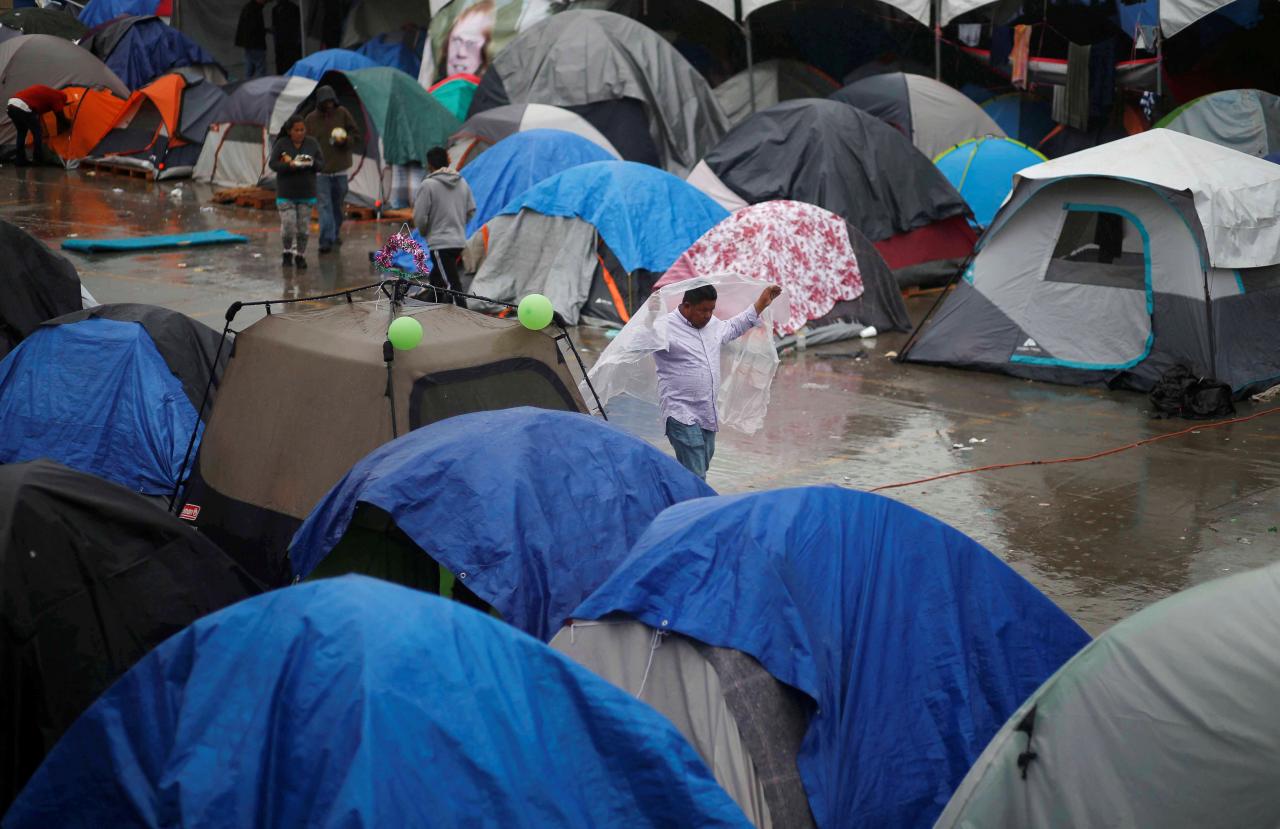 TIJUANA (Reuters) - Federal police took steps to close a migrant shelter in Mexico’s city of Tijuana , sparking protests from some of the dozens of US-bound people who had been staying there after travelling in a caravan from Central America. The arrival of several thousand migrants in recent months, many fleeing poverty and violence in Honduras, has challenged Mexico’s new president to make good on pledges to protect migrants in Mexico, just as the United States makes it increasingly hard for them to cross the border. Andres Manuel Lopez Obrador, who began his presidency last month, has yet to detail how he will improve what he has described as deplorable conditions for people trekking thousands of miles across Mexico to the US border. Officials in mid-December said that, of the nearly 6,000 migrants who had arrived in Tijuana in recent caravans, about half were at a large shelter in a former concert venue and another several hundred had dispersed to other shelters in the city, such as the one being closed. About 1,000 had crossed into the United States, while another 1,000 returned to their home countries. The industrial site was overcrowded, poorly lit and lacked proper facilities for food preparation, said Isain Venegas, a supervisor in Mexico’s public health system. Common illnesses had been treated, he added. Officials told migrants that they could move to the bigger shelter, run by the federal government, about 7 miles (11 km) from the border. Many migrants protested, saying they did not expect other sites to be any better. “Not one of the shelters in Tijuana has the conditions for them to keep us in ... the authorities are tricking us,” said Honduran migrant Reinerio Laine. By mid-afternoon, several dozen migrants had refused to leave and were joined by US activists, as federal and local police in riot gear took formation at the entrance. Others packed belongings and set off on foot to nearby shelters, while several dozen waited for a bus that would bring them to the larger, government-run facility. “We had hoped that now with President Lopez Obrador he could see the conditions we’re in. They said he was going to help, but they’ve treated us worse than animals,” said Maria Claros, 28, from Honduras. “We don’t have anywhere to wash or do our business. I bathe with cold water when I have 20 pesos to pay for it,” she added. For decades, Tijuana has attracted migrants headed north. When Central Americans began arriving in large numbers in November, officials provided lodging at a sports centre, but closed it after rains flooded the venue. Last month, two boys from Honduras were killed outside a shelter for migrant youths.