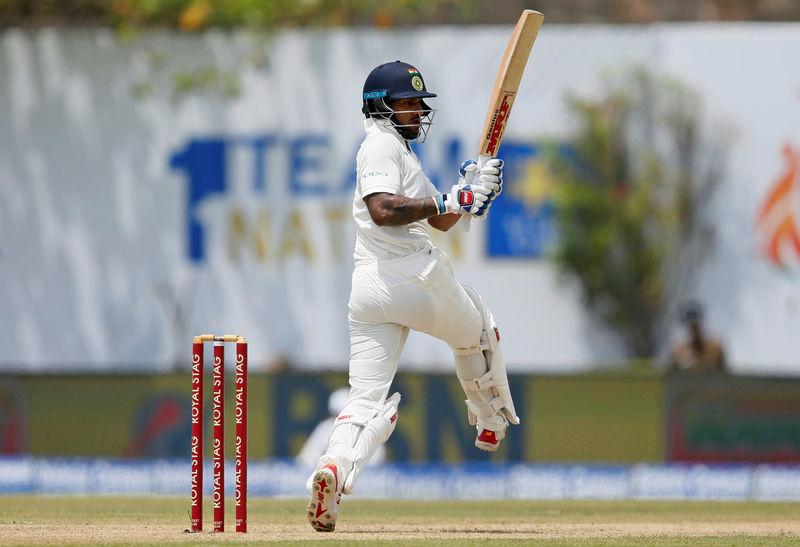 GALLE, Sri Lanka (Reuters) - India opener Shikhar Dhawan smashed a career-best 190 on his test return and combined with Cheteshwar Pujara to lay the foundation for a big first innings total on the opening day of the first Test against Sri Lanka on Wednesday.

The duo added 253 runs for the second wicket to help India overcome the early loss of opener Abhinav Mukund and reach 282 for two at the tea break, scoring at a brisk rate of over five runs an over.

Dhawan, dropped on 31 by Asela Gunaratne at slip, hit 31 boundaries in his 168-ball blitz before throwing his wicket away in the final over before the tea break.

Pujara was batting on 75 with skipper Virat Kohli on one after a free-scoring second session in which the tourists went nearly run-a-ball.

Compounding Sri Lanka's problems, middle-order batsman Gunaratne fractured his thumb which makes him doubtful for the rest of the match, if not the series, at Galle International Stadium.

With regular openers Murali Vijay and Lokesh Rahul indisposed, Dhawan and Mukund opened the innings after Kohli won the toss and opted to bat in the first match of the three-test series.

Mukund made 12 before edging an angling delivery from Nuwan Pradeep into wicketkeeper Niroshan Dickwella's safe gloves.

Dhawan decided to make the opportunity count and the 31-year-old had luck on his side.

Dhawan hit Lahiru Kumara for two boundaries in three balls and was lucky not to fall in the same over when he slashed hard at the final delivery and Gunaratne spilled the catch at second slip.

Dhawan swept spinner Dilruwan Perera for a boundary to bring up his fifth test century off just 110 balls at the same venue where he scored his fourth in 2015.

Pujara needed 80 balls to bring up his fifty with a cover driven four off Kumara as runs kept flowing in the post-lunch session.

Dhawan swept the spinners with contempt and became one of the handful batsmen to score 100 runs in one session.

The left-hander was cruising to his maiden double century when he charged out to Pradeep, only to hit the ball straight to Angelo Mathews at mid-off.

India all-rounder Hardik Pandya made his test debut in the match as did Sri Lanka's Danushka Gunathilaka.

Veteran spinner Rangana Herath is leading the home side in the absence of their ailing regular skipper Dinesh Chandimal.