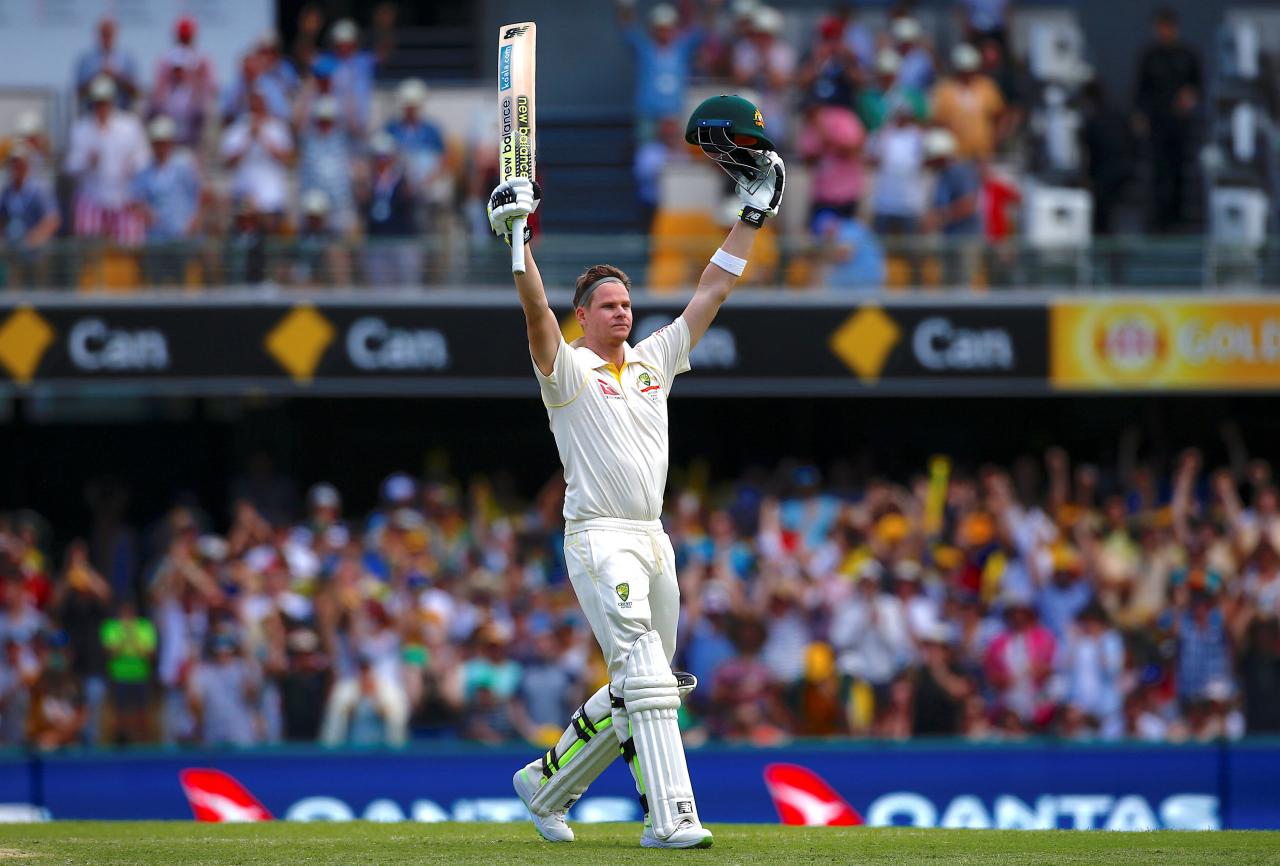 BRISBANE (Reuters) - A captain’s century hewn from granite and two wickets in a fiery pace assault after tea saw Australia wrest the momentum away from England by the end of an enthralling day three of the series-opening Ashes Test in Brisbane on Saturday.

Josh Hazlewood snared two victims to leave England 33 for two at stumps and clinging to a seven-run lead after skipper Steve Smith inspired the hosts with a brilliant, unbeaten 141 in front of a grateful crowd of 33,474 at the Gabba.

Opener Mark Stoneman, on 19 not out, and Joe Root on five survived a furious pace examination in the final overs as the pitch grew appreciably quicker.

With Australia teetering at 76 for four on day two and their nearly 30-year unbeaten record at the Gabba seemingly in peril, Smith dragged his side back from the brink over eight-and-a-half hours of steely application.

By the time tail-ender Nathan Lyon edged to Alastair Cook in the slips, marking the end of Australia’s innings of 328, Smith strode off to a hero’s ovation, having pushed his side 26 runs in front of England’s first innings 302.

“It’ll be up there definitely, obviously with the team in a bit of trouble,” Smith told reporters when asked if was the most satisfying ton of his career.

“I had to bat some time and dig really deep ... I think it was my slowest hundred, someone told me, had to work hard and be really disciplined and resilient.”

Smith’s team mates inspired and his pacemen hitting the deck hard, Cook was soon out cheaply for a second time in the test.

Caught behind for two off Mitchell Starc in the first innings, Cook was caught for seven by the paceman in the deep when he tried to hook a short ball from Josh Hazlewood away to safety.

Hazlewood then had an uneasy James Vince out for two with a rearing delivery that sent an edge to Smith in the slips.

Moments later, Starc struck Root in the helmet with a venomous delivery and took turns with Cummins to pepper Stoneman with short balls.

Root and Stoneman will face more of the same in the morning, but Stuart Broad felt England were in the best position they had been at a Gabba test in over 30 years.

“Actually we’re in a lot of control of this game after three days,” he said. “It’s in our hands to bat big tomorrow.”

Cummins earlier provided fine support to Smith with a knock of 42 in a 66-run partnership, surviving for all but 10 minutes of the middle session until he was finally caught at slip off all-rounder Chris Woakes.

Smith, who began the day on 64, moved slowly but purposefully towards his century and soaked up eight successive dot balls when on 97 before Broad finally gave an opening.

The skipper pounced on a fuller, wide delivery, smashing a drive past mid-off for four, triggering a huge roar from the sell-out crowd.

Having completed his sixth Ashes ton, Smith tore off his helmet, raised his arms in triumph and beat his chest twice in a fired-up celebration, one of the most ardent of his 21 test hundreds.

It helped swing the match back into balance after England’s veteran pacemen had dominated the morning.

A fired-up Broad had captured two wickets and broken a 99-run stand between Smith and Shaun Marsh, with fellow seamer James Anderson chipping in with another.

The Australian number six lasted five overs in the morning before being dismissed softly for 51, spooning a slower delivery from Broad straight to Anderson at mid-off. Tim Paine, who replaced Matthew Wade in part due to his better form with the bat, managed 13 before falling to Anderson with the fourth delivery of the new ball. Starc smashed Broad over the long-off rope for six but the England paceman turned the tables on his fellow quick two balls later with a caught and bowled.