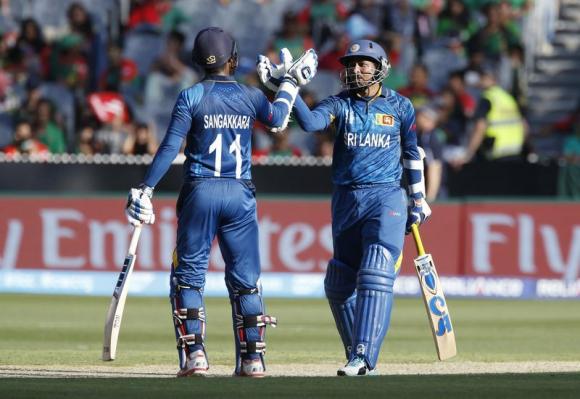 MELBOURNE (Reuters) - Sri Lanka veterans Tillakaratne Dilshan and Kumar Sangakkara smashed imperious centuries to punish a wasteful Bangladesh and set up an emphatic 92-run win in their World Cup clash in Melbourne on Thursday. Dilshan blasted 161 and Sangakkara 105 as the evergreen pair combined for an unbeaten 210-run stand to fire Sri Lanka to an imposing 332-1 in front of a boisterous crowd of 30,000 at the Melbourne Cricket Ground. Appalling in the field, Bangladesh's middle and lower order grafted hard but were set a mission impossible after a top order collapse that saw them slump to 100-5 after 20 overs. Sri Lanka paceman Lasith Malinga captured the final two wickets in consecutive balls as Bangladesh were dismissed for 240 with three overs to spare. Though master batsman Sangakkara was dropped twice in his aggressive 76-ball knock, 38-year-old Dilshan was virtually flawless as he enjoyed a welcome return to form after scoring 24 and a duck in the team's opening matches against New Zealand and Afghanistan respectively. He belted 22 fours to all corners of the ground to notch his highest score in ODIs and muttered thanks to the heavens after completing his 21st ton in the format off a streaky inside edge. He later returned to take 2-35 with his part-time offspin, dismissing all-rounder Shakib Al Hasan for 46 and having Bangladesh captain Mashrafe Mortaza stumped by wicketkeeper Sangakkara for seven to walk away with the man-of-the-match award. Conditions had begged for a big total on the MCG's benign drop-in wicket and Bangladesh made Sri Lanka's task easier from the start. Opening batsman Lahiru Thirimanne was dropped at slip by Anamul Haque on the fourth ball -- an easy, waist-high chance off paceman Mortaza. That set the tone for a dreary afternoon of grassed catches, missed run-out opportunities and leaked runs from sloppy fielding that made Bangladesh's place at the global showpiece seem an embarrassing anomaly. Thirimanne would be reprieved three times before finally dismissed on 52 when attempting an ill-conceived ramp shot off paceman Rubel Hossain that flew straight to Taskin Ahmed at third man. He had earlier been the beneficiary of a missed stumping and another lost chance when wicketkeeper Mushfiqur Rahim failed to move for a nick that flew between the stumper and slip early on. Completing a forgettable afternoon, Mushfiqur later failed to back up a throw at the stumps that would have almost certainly captured Dilshan's wicket. Playing his 400th ODI, Sangakkara could have been out for 23 had paceman Taskin clutched a difficult caught-and-bowled chance. He was dropped again on 60 when cutting straight to point where Mominul Haque put down a sitter at chest height. The fielder's petulant response, throwing the ball at the bowler's end in frustration, caused three runs from an over-throw. Though Dilshan hogged the strike for much of the closing overs, Sangakkara completed his 22nd ODI century with a single to long-off in the final.