Ceremony fit for a king: England's Richard III to be reburied 530 years after death 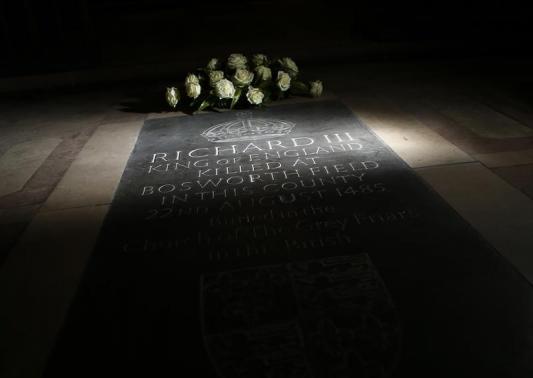 Ceremony fit for a king: England's Richard III to be reburied 530 years after death

LONDON - King Richard III, the medieval English monarch whose remains were found under a car park three years ago, will be reburied next week nearly 530 years after he was slain in battle and dumped in an humble grave. The remains of Richard - the last English king to die in battle when he was killed at the Battle of Bosworth Field in central England in 1485 - were found in 2012. His body will be re-interred at Leicester Cathedral next week in an oak coffin designed by a descendant whose DNA helped identify the remains. He will also win the regal recognition supporters say his conqueror Henry Tudor, later Henry VII, denied him. "The whole point was if Richard's remains were found he would get the dignified and honorable burial he was denied in 1485," said Phil Stone, chairman of the Richard III Society, which was formed 90 years ago and now has several thousand supporters worldwide. Shakespeare depicted Richard as a tyrannical, hunchbacked, bloodthirsty monster who murdered his way to the throne on the death of his brother Edward IV and famously went down fighting to keep his crown crying out "A horse! A horse! My kingdom for a horse!". Among his alleged victims were former King Henry VI, another of his brothers, and his own nephews - the "Princes in the Tower", one of them 12-year-old Edward V, the rightful king. MALIGNED But the Richard III Society and others have argued he was a much-maligned, benevolent ruler, innocent of the crimes Shakespeare laid at his door. One of those disbelieved the Shakespeare version was screenwriter Philippa Langley, who spent seven years searching for the monarch whose naked body was taken from the battlefield at Bosworth to the Grey Friars' friary in Leicester where it was buried. While grand sepulchres house the remains of most English monarchs in Westminster Abbey and Windsor Castle, Henry VII, paid just 10 pounds for a memorial to Richard. It was thought the body was even thrown in a nearby river at a later date but Langley's hunch that the remains were under a municipal car park where someone had painted a letter R on the tarmac proved correct. "At the beginning of the project we never thought we'd be successful, the odds were 1000-1 against," Richard Buckley, who headed the archaeological team from Leicester University, told Reuters. DNA tests have since left scientists 99.999 percent sure the skeleton with a curved spine was indeed Richard. Tests showed he had suffered 11 wounds, including nine to the skull and a potentially fatal blow to the pelvis. The wounds were consistent with accounts that he died, unhorsed, having lost his helmet in battle. On Sunday, a cortege with his coffin will tour villages in Leicestershire and the battlefield site at Bosworth then placed on public display at Leicester Cathedral before re-burial next Thursday. "The last time he left that battlefield, he left it naked slung over a horse," Langley said. "To take him back him there and to honor him there now as a king, I think it's making peace with the past so I hope that will be a special thing." Thursday's ceremony will be overseen by the Archbishop of Canterbury, the spiritual head of the Anglican church, with the current royal family represented by the Countess of Wessex, the wife of Queen Elizabeth's youngest son Prince Edward, and the queen's cousin, the Duke of Gloucester. Even Langley and Stone are staggered by the interest in Richard. "We always hoped if we found a medieval king they'd be some interest," Langley told Reuters. "We never saw the interest coming that we did from Russia, and Brazil and Japanand Australia and the Americas. It really came from everywhere." DIVISIVE Divisive in life, Richard has also proved polarizing in death. The Plantagenet Alliance, which includes some distant descendants, demanded he should be re-buried in York, the power base of his 26-month reign. They took the matter to court but were over-ruled. Langley herself was unhappy with the design of the tomb in which his coffin will be laid to rest. Some historians are not even sure the remains are those of Richard and cannot understand the fuss over his re-burial. "I'm not altogether convinced it's him and I also find it slightly anachronistic because after all he clearly had a funeral and a burial and things 500 years ago," Professor Michael Hicks, an expert on Richard, told Reuters. "It is a bit unnecessary, but it is aiming at the populace market and it reaches it, it captures people's imagination without necessarily telling us very much history. "Can one draw a lot of conclusions from the bones about his life, lifestyle, character? I doubt it very much." One person who is thrilled is Canadian-born Michael Ibsen, who genealogists said was the direct descendant of Richard's sister, Anne of York, and whose DNA was crucial to identifying Richard. A furniture-maker by trade, he has made the coffin. On Sunday, the skeleton was placed in the lead-lined casket, wrapped in woolen fleece, wadding and linen, along with a rosary, and sealed by Ibsen. "I have to confess there have been times when I've stood back at the end of the day alone in the workshop and think 'gosh I'm making Richard III's coffin'," he told Reuters. - Reuters [caption id="attachment_9284" align="alignnone" width="500"] 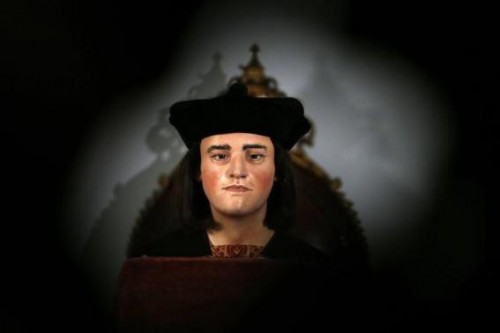 A facial reconstruction of King Richard III is displayed at a news conference in central London.[/caption]