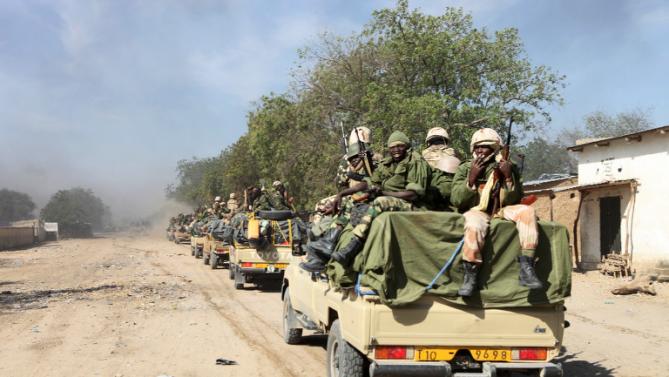 N'DJAMENA/NIAMEY - Chad and Niger launched a joint army operation against Boko Haram militants in Nigeria on Sunday, military sources said, stepping up a regional push to end the Sunni Muslim group's six-year insurgency. Boko Haram has expanded cross-border raids into Cameroon, Chad and Niger in recent months. This has spurred Nigeria's neighbours to retaliate, although cooperation between them and Abuja has been limited and at times strained. Sunday's strike marks Niger's first major push into Nigerian territory to combat Boko Haram. It had until now only defended itself against militant incursions in border areas. Nigeria's government appealed for greater international help in combating the insurgency after Boko Haram pledged allegiance on Saturday to Islamic State, the violent jihadi organisation that rules a self-declared caliphate in parts of Iraq and Syria. Chad, backed by its air force, has already sent troops many kilometres inside northeastern Nigeria, winning back areas from the Sunni jihadist group near the Cameroon border. "We can confirm that Chadian and Nigerien forces launched an offensive this morning from Niger. The offensive is underway," said Colonel Azem Bermandoa, spokesman for Chad's army. One of the Niger sources said Abuja had given the green light for the operation. Chris Olukolade, spokesman for Nigeria's defence headquarters, said in a statement "there were some preemptive manoeuvres along an axis in the theatre. Nigerian forces were also involved." A witness in Niger's southeastern town of Diffa said he saw at least 300 vehicles, including army jeeps with heavy weapons as well as water and fuel trucks, leaving barracks overnight and heading to the border. Niger military sources reported fighting near the border river of Komadugu, adding the plan was to head south towards the Nigeria towns of Damasak and Malam Fatori. The African Union agreed to set up a regional force to combat the group in late January and is pushing for a UN Security Council mandate for the operation. It was unclear how many soldiers were involved in Sunday's military push, which came the day after suspected Boko Haram insurgents killed at least 50 people in four bomb attacks in Maiduguri in northeastern Nigeria. Those were the worst attacks in the city, Boko Haram's birthplace and the chief town of Borno state, since the group tried to take it in late January and again in early February. Boko Haram wants Maiduguri as the capital of the Islamic state it is seeking to create in northeastern Nigeria. It currently controls territory about the size of Belgium in that region. –Reuters