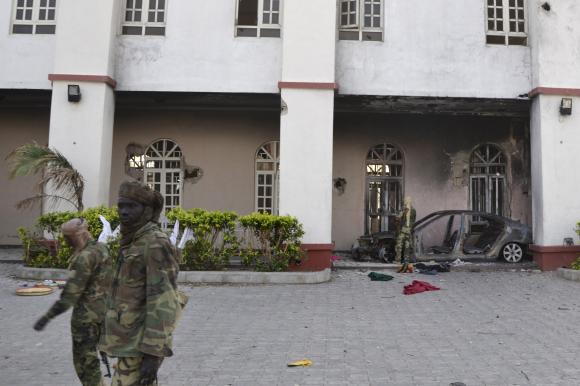 NIAMEY/N'DJAMENA - About ten Chadian soldiers died in fighting to free two towns in northern Nigeria previously held by Boko Haram, the first gains against the militants made in a joint offensive launched with Niger at the weekend, military sources said on Monday. About 30 Nigerian and Chadian soldiers were wounded in clashes over Malam Fatouri and Damasak, a day after thousands of troops crossed the border to retake areas held by the Sunni Islamist group, whose insurgency has forced Nigeria to delay an election and neighbors to mobilize their armies. A Chadian officer, who asked not to be named, said about ten Chadian soldiers were killed and 20 wounded in fighting to liberate the towns. There was no official comment from Chad's army. "We have kicked the enemy out of these areas and they are now under our control," one of the Niger military sources said. Damasak, the town furthest into Nigeria, is 10 km (6 miles) south of the Niger border, where Niger and Chadian troops have been massing in recent weeks ahead of the offensive. A medical source in Diffa, the capital of the Niger region which borders Boko Haram's heartland in Nigeria's northeast, said 30 wounded soldiers had been admitted to the town's hospital. The Niger military source said about 300 Boko Haram militants had been killed. There was no official confirmation of the toll and it was not possible to verify the figure. "We had permission from Nigeria for this action," the source said. There was no immediate comment from Nigeria, which has launched its own offensive against the militants, whose gains forced Nigeria to delay elections that were due in February. Boko Haram's 6-year insurgency, who aims to carve out a caliphate in Nigeria's northeast, has killed thousands. The group has pledged allegiance to Islamic State, which rules a self-declared caliphate in parts of Iraq and Syria, according to an audio clip posted online on Saturday. Cameroon, Chad, Niger and Benin have this year mobilized forces to help Nigeria defeat the group after it seized swathes of territory and mounting cross-border attacks. Nigeria and its neighbors have been working to pull together plans and rules of engagement for a regional force of 8,700 troops but cooperation between the region's armies has been strained at times. - Reuters