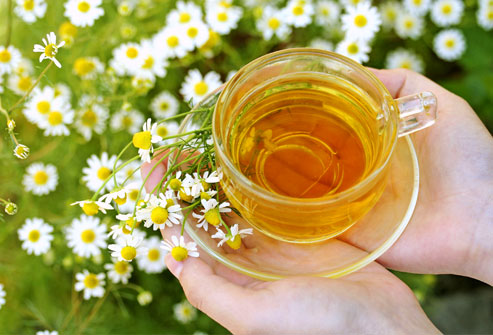 NEW YORK - Consumption of chamomile tea was linked with a lower risk of thyroid cancer in a small Greek study. Researchers interviewed some Athens residents about their lifestyle, eating and drinking habits and found that people who reported drinking more chamomile tea over longer periods of time were less likely to develop thyroid malignancies or benign growths than those who didn't. While the study doesn't prove tea prevents cancer, it adds to a growing body of evidence pointing to the potential health benefits of a Mediterranean diet including lots of lean fish, fresh vegetables and healthy fats in addition to tea, study co-author Dr. Athena Linos, an environmental health researcher at Prolepsis in Greece, said by email. "The finding was not surprising to me because many aspects of the Mediterranean diet have been shown to be protective towards cancer in general," Linos said. Many people in Greece follow a Mediterranean diet. Out of every 100,000 people there, about 1.6 are diagnosed with thyroid cancer every year, Linos said. That compares with average rates of 13.2 and 5.2 per 100,000 people in the U.S. and Europe, respectively, "suggesting that it may be something in the Greek diet – such as tea – which accounts for this difference." Linos and colleagues examined cancer rates and dietary habits in 113 patients admitted to two Athens area hospitals for thyroid cancers between 1990 and 1993. They compared those patients to 138 people without thyroid cancer who were either healthy or had other unrelated diseases, and also to another 286 people with benign thyroid disease. Researchers interviewed participants about their medical history, diet and lifestyle habits, as well as consumption of alcohol, coffee and tea. Then they estimated the odds of developing thyroid cancer or benign growths based on tea consumption, comparing the outcomes for daily versus weekly cups of tea and exploring whether the habit had a bigger impact over several years. After accounting for age, gender, and body mass index, the researchers found that as consumption of chamomile tea increased, the odds of developing any type of thyroid malignancy significantly declined. People who drank chamomile tea two to six times a week were about 70 percent less likely to develop thyroid abnormalities. Thirty years of regular consumption reduced the risk by about 80 percent. The researchers also looked at the connection between thyroid cancer and consumption of two other types of herbal tea popular in Greece – sage tea and a blend known as mountain tea – and found that these also reduced the likelihood of malignancies, though the association wasn't as strong as it was for chamomile tea. Because this review is based on data from the 1990s, it's possible that lifestyle habits have changed since then, making the results less applicable to the way people drink tea today, noted Samantha Heller, a nutritionist at New York University's Center for Musculoskeletal Caner and Sports Performance Center, in an email. Chamomile tea isn't really tea, Heller pointed out. The teas in the study are really infusions of leaves, roots, bark, seeds or flowers of other plants. "The link between herbal infusions and tea consumption and disease is compelling but not a slam dunk," said Heller, who wasn’t involved in the study. "Chasing back a double bacon cheeseburger and large fries with a cup of herbal tea is unlikely to undo the deleterious effects of poor lifestyle choices." Herbal teas may help protect against cancer or other diseases because of components linked to antioxidant and anti-inflammatory properties such as polyphenols and flavonoids, said Dr. Betul Hatipoglu, an endocrinologist at the Cleveland Clinic in Ohio. Still, "lifestyle as a whole matters," Hatipoglu, who wasn't involved in the study, said by email. "It's possible that individuals who were consuming these herbal teas in the study were also more active and ate healthier." - Reuters