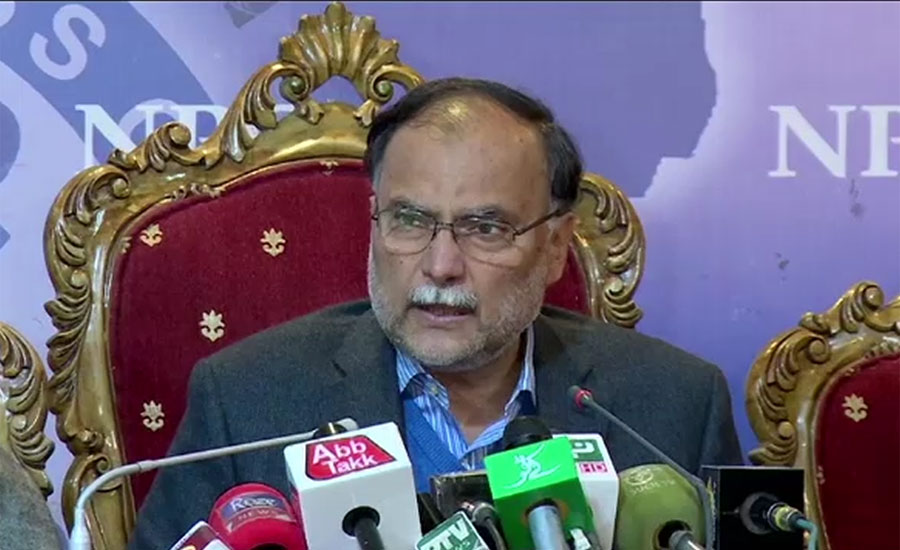 ISLAMABAD (92 News) – Pakistan Muslim League-N (PML-N) senior leader Ahsan Iqbal has said that those chanted the slogens of ‘Naya Pakistan’ are adopting the old polices. Addressing a press conference on Thursday, Ahsan Iqbal mentioned that the opposition desired to serve the public with collaboration of the government but the rulers did not take any step forward. Taking jibe at the government, the former interior minister said that Prime Minister Imran Khan deceived the masses by showing them false dreams. He also said that Pakistan Tehreek-e-Insaf’s (PTI) coming into power is the biggest deceive of the country’s 70 years history. Ahsan Iqbal said that the success of his party is being presented as a failure through a conspiracy, adding that stories of so-called corruption and debts were created. He claimed that those chanting slogans of Naya Pakistan are taking up policies of previous government. Ahsan Iqbal further said that the incumbent government is trying to take the credit of PML-N’s work. “Concessions on visa policy was given in PML-N government’s tenure,” he said. He regretted that the government unable to inaugurate the already prepared projects. Iqbal said that political crisis is the reason behind the fall of two percent growth rate, adding that no country makes mockery of its growth rate. “Not only World Bank but the International Monetary Fund (IMF) was also saying in our tenure that Pakistan’s economy would improve in 2019,” Ahsan Iqbal added. On the occasion, Former minister Saira Afzal Tarar mentioned that the current government is taking back the health cards of previous government and again providing with their names.

Earlier, Ahsan Iqbal said on Sunday that the Pakistan Muslim League-N (PML-N) was separated from the rule through anti-democratic forces. Addressing foundation day ceremony of the PML-N, Ahsan Iqbal claimed that if the general election was conducted free, fair and transplant, no one could stop the PML-N from making government. Responding to disgruntle leader of PML-N, the former interior minister said that Nawaz government has not come to end for not accepting the advice of Chaudhry Nisar, while the PML-N was punished for committing the sin of making the country impregnable and forming the China Pakistan Economic Corridor (CPEC). Criticizing their opponent, the PML-N stalwart said ears should not be lent to statements of Fawad Chaudhry because he became loudspeaker of their party. He also declared Minister for Railways Sheikh Rasheed as loudspeaker of the every tenure. Ahsan Iqbal mentioned that Prime Minister Imran Khan was claimed to give one billion jobs before the election but he made the 0.5 million people as unemployed. He further asked that this is a state of Madina where the houses of poor were bulldozed.