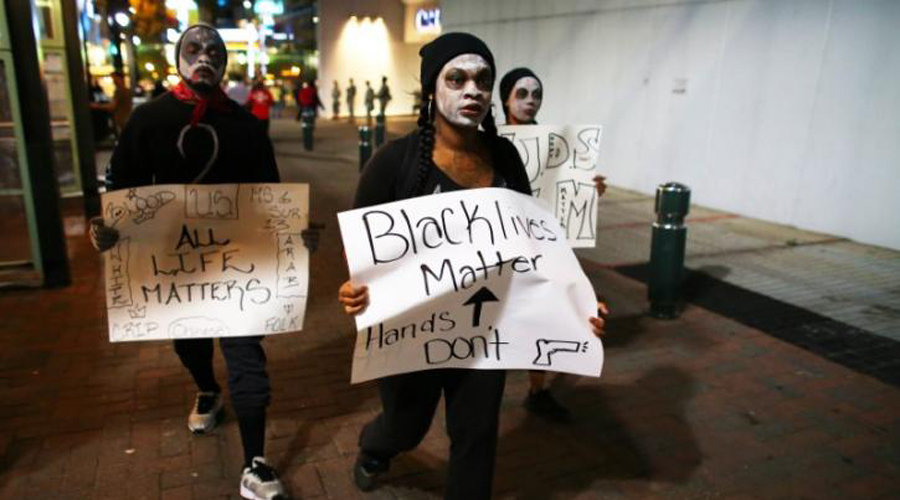 CHARLOTTE - The family of the black North Carolina man whose shooting death by police triggered two nights of riots viewed videos of the episode and then added to public pressure to release the videos by asking that they be made public. The videos show Keith Scott was calm, acting in a non-aggressive manner and slowly walking backward with his hands by his sides when he was shot by police on Tuesday. It was unclear if Scott was holding a gun, as police contend, the family's lawyer said in a statement. The statement was released as hundreds of protesters gathered in the city for a third straight night, some chanting "release the video," and the city imposed a curfew from midnight to 6am local time. Police fired tear gas and non-lethal projectiles to break up crowds that blocked traffic on a highway. Scott's death is the latest to stir passions in the United States over the police use of deadly force against black men. Protests have asserted racial bias and excessive force by police and have given rise to the Black Lives Matter movement. After reviewing the videos, Scott family attorney Justin Bamberg said: "While police did give him several commands, he did not aggressively approach them or raise his hands at members of law enforcement at any time." "It is impossible to discern from the videos what, if anything, Mr. Scott is holding in his hands," he said in the statement. Police say Scott was carrying a gun when he approached officers and ignored repeated orders to drop it. His family previously said he was holding a book, not a firearm, and that it now has more questions than answers after viewing two separate videos recorded by police body cameras. Charlotte-Mecklenburg Police Chief Kerr Putney has said the video supported the police account of what happened but does not definitively show Scott pointing a gun at officers. The rioting that has engulfed the city claimed a victim on Thursday, as city officials said a protester who was shot on Wednesday had died. Nine people were injured and 44 arrested in riots on Wednesday and Thursday morning. The man who was critically wounded by a gunshot during the protests, Justin Carr, 26, died on Thursday but the circumstances surrounding his shooting remained unclear. "PERVASIVE FRUSTRATION" Calm prevailed in the city of Tulsa, Oklahoma, where police released a video of the fatal shooting of Terence Crutcher, who was shot by police after his vehicle broke down on a highway. The officer who fired her gun was charged with first-degree manslaughter on Thursday. US President Barack Obama called the mayors of both cities on Wednesday to offer condolences and assistance. On Thursday he urged protesters to remain peaceful, while still addressing concerns of racial inequality. "(The) overwhelming majority of people who have been concerned about police-community relations (are) doing it the right way," Obama told ABC News. "Every once in a while you see folks doing it the wrong way. "I think it's important to separate out the pervasive sense of frustration among a lot of African-Americans about shootings of people and the sense that justice is not always colour blind," he said in an interview with the "Good Morning America" programme. Protesters remained peaceful as the curfew approached on Thursday night, with several hundred migrating from the centre of town to a major highway. "Whose streets? Our streets," they yelled as helicopters circled overhead. National Guard troops fortified a robust police presence throughout the centre of town, helping to quell the crowd. "It seems to me tonight is more peaceful than last night," Charlotte Mayor Jennifer Roberts told CNN.Others gathered in front of a police station chanting "we want the tape." National Guard troops stood at the entrance while police warned people they would be subject to arrest. -Reuters